The efforts of University of Canterbury students to install solar energy power for people around New Zealand, in the Pacific and in Nepal will be highlighted this month. 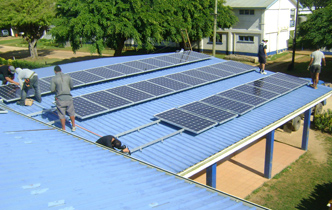 The efforts of University of Canterbury students to install solar energy power for people around New Zealand, in the Pacific and in Nepal will be highlighted at the Engineers Without Borders national conference later this month.

The annual conference at the university campus on July 19 includes industry professionals, student leaders and community representatives to discuss humanitarian aspects of engineering related to disaster, development and sustainability. The focus is on disaster risk and recovery, co-operation in the development sector, and indigenous perspectives on development.

The introduction of solar power in the South Pacific is reasonably recent and is predominantly funded through aid organisations.

Pacific countries rely heavily on diesel generators as their main source of power.  The generators are very expensive, unsustainable, bad for the environment and noisy, and many businesses, schools and households cannot afford power.  These systems were installed with a goal of reducing and, in some cases, completely eliminating power costs for the schools which previously, were struggling to keep up with their bills.

Four Canterbury students are also working on a renewable energy project helping a Maori community in the eastern Bay of Plenty which is connected to the national grid but looking at being more self-sufficient. The community is looking at the technical and economic feasibility of solar power, wind, micro-hydro and biomass for the community. Their goal is to determine the best mix of technologies and design systems that could be installed.

"Last year we visited Nepal to investigate the feasibility of implementing micro-hydro and solar panel systems. Nepal relies heavily on aid funding to implement such projects. The University of Canterbury has a number of Nepalese students and two of them went as volunteers for the work in Tonga.’’

Professor Bodger recently received a meritorious service award from the New Zealand Electricity Engineers’ Association, joining only 13 other individuals to have received the accolade in the 89-year history of the organisation.