Underwater vehicle to be used to measure sea ice 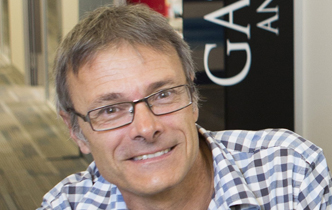 A University of Canterbury scientist is measuring the thickness and biological productivity of Antarctic sea ice using a remote underwater vehicle to understand its role in ocean circulation and the functioning of polar ecosystems.

Professor Ian Hawes from Gateway Antarctica, University of Canterbury, has received $85,000 in New Zealand Antarctic Research Institute funding to develop a new approach to sea ice research that will allow monitoring of thickness and biological productivity of the polar sea ice over long distances and with fine resolution this summer. Other than spot drilling, measuring sea ice has been extremely difficult because of its inaccessibility.

"Our cutting-edge project will produce accurate information on sea ice thickness and the biomass of algae growing in the ice, information which is of global significance for better understanding linkages between ice dynamics, ecosystems and climate change.

"Developing new ways of automated measurement is important as, while it is a critical part of the global climate, it is difficult to sample. Sea ice comes in two types, pack ice and fast ice. Fast ice is attached to land and is safe to access and drill holes for only part of the year. Pack ice is not attached to land but occurs as broken up floes that can only be accessed by some ships.

"This has put major limitations on where we can sample and how many samples can be obtained.  At the same time we know that sea ice properties are variable over distances of a few metres. Information from satellites is very limited too as they can only tell us the elevation of the ice surface.

"What we are aiming to do with the underwater vehicle is to make measurements with finer resolution over greater distances to allow us to measure ice properties in a much more robust way. Sea ice varies depending on how old it is, but we are expecting it to be two to three metres thick.

"We are equipping the underwater vehicle with specific instruments to look up at the sea ice from below and tell us how thick it is, how transparent it is and how much algae is growing underneath. We are still making plans but our work will ramp up from October.

"We know the Arctic sea ice area and volume has been declining for some time but Antarctic sea ice is bucking the trend, except for an area to the west of the Antarctic Peninsula. Otherwise, Antarctic sea ice has been increasing slightly in extent and the reasons are not completely clear. It has been suggested that this may be related to shifts in wind patterns or freshening of the surface of the ocean due to increase ice melt and precipitation.’’

Professor Hawes will head down to the Ross Sea region later this year as part of New Zealand's Antarctic programme. He has spent more than 30 years researching Arctic and Antarctic ecosystems. More than 30 University of Canterbury researchers will be on the ice this coming summer.