University of Canterbury PhD student Gabriela Roldan is investigating how five global cities including Christchurch are benefitting from their close Antarctic connections. 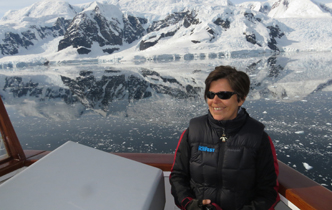 University of Canterbury PhD student Gabriela Roldan is investigating how five global cities including Christchurch are benefitting from their close Antarctic connections.

"The Antarctic connection offers a remarkable opportunity for a city like Christchurch to revive its image in the world after the 2010 and 2011 earthquakes.

"Christchurch has plenty to offer currently to the Antarctic community but a stronger leadership and a clear plan integrating all stakeholders is required to step forward and become the Antarctic gateway city of excellence.

"However, the Antarctic business encompasses more than the infrastructure and supplies to support tourism. It includes logistics and operations for Antarctic National Programmes, search and rescue capabilities, development of local infrastructure, provisioning of appropriate goods and services to supply the Antarctic demand, experienced personnel, world-class scientists and universities and research institutes.’’

Roldan says the Antarctica’s remoteness and isolation is appealing to people but it can be a challenge for many wishing to work there or those who simply want to see the frozen continent. Her research is examining relationships built up between the five gateway communities and Antarctica which encourages the construction of social and national identity.

Countries situated nearest Antarctica have strong interests in maintaining existing links and developing new connections with the southern continent. Despite the efforts made to distance their Antarctic interests from their neighbours, geopolitical and economic benefits are the main objectives in these nations’ policies.

"Argentina and Chile have constructed a strong sense of Antarctic heritage and rights over the claimed sectors among their nationals. The South American countries are less than subtle when discussing sovereignty over the Antarctic Peninsula, in spite of signing the Antarctic Treaty in 1959.

"Other countries like Australia and New Zealand say their Antarctic interests are more diplomatic, but nonetheless focus on the benefits that the Antarctic connection brings.

Roldan is supervised by Gateway Antarctica director Professor Bryan Storey and regularly visits the Antarctic as a naturalist on board cruise ships, departing from her home town of Ushuaia but is passionate about her postgraduate studies at the University of Canterbury. More than 30 University of Canterbury researchers will be on the ice this coming summer.