A state of the art UC quadcopter is helping provide video footage of earthquake damaged homes along clifftop edges in the Port Hills. 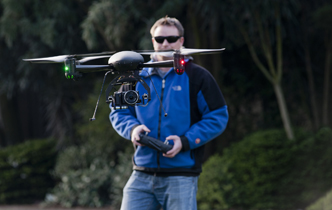 UC's Nick Key and the quadcopter.

A state of the art University of Canterbury quadcopter is helping provide video footage of earthquake damaged homes along clifftop edges in the Port Hills.

UC geography associate professor Peyman Zawar-Reza says footage from the quadcopter is being collected for consulting firm Aurecon on behalf of the Canterbury Earthquake Recovery Authority.

"Flights were flown focusing on the damaged houses where it was too dangerous for people to inspect from the ground. This helped Aurecon engineers obtain a better picture of the damage and condition of the hill suburb to enable them to develop a plan for demolition and slope stabilisation.

"We also worked alongside one of our graduate geography students who is now working at Aurecon while undertaking this work.

"We have also put flights inside Moa Bone Cave to determine damage to the cave for Aurecon on behalf of the Christchurch City Council.

"Since February 22, 2011, no one has been inside Moa Bone Cave because of the existing risk. We undertook a series of flights in and around the cave to enable engineers to establish the damage extent of the cave interior.’’

The quadcopter has also done aerial mapping work of the Greendale fault line in the Canterbury foothills. See the quadcopter in action here.

This research is still in progress and is being carried out for Dr Brendan Duffy (Geology) and Dr Chris Gomez (Geography) with more flights planned.

"Visiting international students will be using the imaging also as part of their projects this year,’’ Professor Zawar-Reza says.

The UC geography quadcopter will carry out aerial mapping work around Waimakariri River terracing near Springfield and at Cass Field Station in Canterbury.

It has also undertaken flights in Antarctica around Scott Base demonstrating the capabilities to Antarctica New Zealand and the US Antarctic Programme staff. It was the first quadcopter to fly in Antarctica for science.

A demonstration flight has been made for the New Zealand Fire Service during its recent emergency exercise on campus.

The quadcopter has also flown in and around various locations of the Avon River and the Avon-Heathcote Estuary to provide footage for a documentary film being produced by last year’s Erskine visitor Professor Peter Newman from Perth’s Curtin University. The film will be premiered in Christchurch in April.

Later this year, the quadcopter is planning to fly up the Fox Glacier to undertake some imaging work of the glacier moraine.

The UC quadcopter operation is performed by a qualified pilot, the Department of Geography’s Nick Key, and is approved by the New Zealand Civil Aviation Authority to operate remotely piloted aircraft systems.

UC’s Department of Geography is taking leadership in including quadcopter technology as part of undergraduate and postgraduate teaching. The quadcopter is heavily used in at least two courses at undergraduate level.