One of New Zealand's most talented young musicians and University of Canterbury honours graduate student will return home next month to give a series of performances. 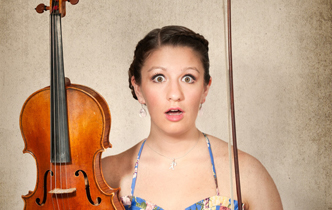 One of New Zealand’s most talented young musicians and University of Canterbury honours graduate student will return home next month to give a series of performances.

Bryony Gibson-Cornish, a Fulbright scholar, will give recitals in Christchurch and Auckland before returning to New York in September.

After graduating with first class honours from Canterbury, Gibson-Cornish moved to New York in 2012 to pursue a Master of Music degree at The Juilliard School. Chamber music is her passion and this year she will perform with Auckland Philharmonia Orchestra as its young soloist of the year.

"I have been studying and performing this last year and from September I’ll also be pursuing research through Juilliard’s prestigious scholastic distinction programme.

"I hope to discover how baroque music practices such as improvisation can influence 21st century musicians in their interpretation and process of learning solo instrumental works by Johann Sebastian Bach.

"Before moving to New York I had two wonderful teachers in Stephen Larsen (viola) and Dame Malvina Major (voice) whom I studied with while at the Pettman National Junior Academy of Music and at the University of Canterbury, when I began my Bachelor of Music at 15.

"I love that music is a universal language and that we are able to communicate our emotions through any given melody. I am also an adrenaline junkie – the exhilaration that I experience when performing is absolutely addictive.

"I live on that buzz of being able to perform and share my music with others. All the hours of practice and rehearsal are worth it after a successful performance.

"I think that New Zealand is an incredible place to be for a young musician for many reasons. Our small population makes the country a unique place for musicians to develop, because there are more professional opportunities for young people than in other countries.

"Part of my musical upbringing involved playing in orchestras, particularly the NZSO National Youth Orchestra and the Christchurch Symphony Orchestra. I was also lucky enough to be the NZSO’s inaugural fellowship student in 2010 which gave me incredible insight into how an orchestra works.

"I have had an incredible time here at Juilliard. It took a while to settle into living in New York City. But now I am very comfortable living here and I have been able to grow, as a musician and person, in ways I never thought possible.

"Some of the highlights have been playing in the Juilliard Orchestra and the historical performance ensemble, Juilliard415. It is exhilarating to play with such talented musicians.’’

Head of the University of Canterbury’s School of Music Dr Glenda Keam says she is delighted to hear of Gibson-Cornish’s continuing successes as a performing musician and as an academic studying performance practice.

"Her musical talents were recognised from a young age while she was a student at Rangi Ruru Girls' School and through her time at the School of Music here.

"Many opportunities provided by Christchurch, such as performing in the Christchurch Symphony Orchestra from the age of 14, have contributed to a career path which now sees her studying and being a mentor at one of the great international music schools, The Juilliard School in Manhattan.  I wish her all the best for her ongoing musical journeys.’’