A UC bioengineering graduate has appeared on NBC News' Today Show in the US as one of a number of PhD students from around the world to feature in a modelling campaign. 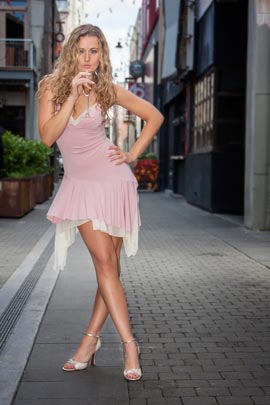 Dr Nicole Kleinstreuer in a photo shoot at Sol Square in Christchurch before the earthquakes. Photo: Ron Throw.

A University of Canterbury graduate, Dr Nicole Kleinstreuer, appeared on NBC News’ Today Show in the United States for being one of a number of PhD students from around the world to feature in a modelling campaign.

Dr Kleinstreuer, who graduated from Canterbury with a doctorate in bioengineering, says she was approached by design company Betabrand to participate in their PhD modelling campaign.

The Today Show, a national morning show in the United States, filmed the campaign’s photo shoot and the segment aired on the show on 30 April as part of a series of stories on redefining beauty. View here.

"I was interviewed by Jenna Bush [George W. Bush's daughter], who is a correspondent for The Today Show. She was lovely, very down to earth and easy to talk to, perhaps a little to my surprise," Dr Kleinstreuer says.

"While working as a model earlier, I was put off by the amount of anti-intellectualism in the industry. It's almost as if models are expected to be stupid and you are viewed with extreme suspicion if you choose not to conform to that stereotype.

"I think society's concept of beauty is pretty limited, and could certainly use a redefinition to encompass much more of the self than just the surface.

"My PhD research was in the Centre for Bioengineering at the University of Canterbury and I focused on mathematical modelling and looked at mechanisms by which the kidney maintains balance in the body.

"The mathematical models we developed could someday help to inform control devices for artificial kidneys. It is great to be academic but to also engage with every day activities. While I was at Canterbury, I also taught salsa to many other students."

Dr Kleinstreuer did her postdoctoral training with the United States Environmental Protection Agency, which is one of the most critical federal regulatory agencies in the world, and set limits for air emissions, chemical use limits such as pesticides, drinking water quality and a whole range of other standards to protect human health and the environment.

"I miss Christchurch and the University of Canterbury enormously. During the visits I've made back since then the earthquakes, it has been heart-warming to see how strong Cantabrians are and how much progress is being made to the rebuild.

"The spirit of the University of Canterbury cannot be shaken by any natural disaster. There is resilience and a camaraderie among all the students and staff that will always endure.

"Students who complete the courses there will have a pretty amazing graduate profile, considering what Christchurch has gone through. I was able to get the best postdoctoral position I could have ever asked for coming straight out of my PhD at Canterbury."

You can view some PhD model campaign photos here.