UC will have many of its electric vehicles featuring in Evolocity, the first event of its kind in New Zealand, at Ruapuna, Christchurch, later this month. 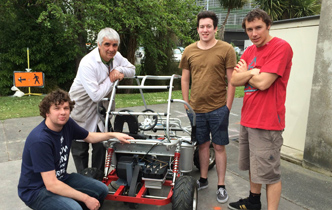 The University of Canterbury will have many of its electric vehicles featuring in Evolocity, the first event of its kind in New Zealand, at Ruapuna, Christchurch, later this month.

University electrical and computing engineer Dr Paul Gaynor says all the events will show the benefits of electric vehicles.

"New Zealand produces close to 80 percent of its electricity from low-to-zero emissions renewable sources so electrifying our vehicle fleet will have considerable environmental benefits and will also help the economy by displacing the cost of importing fossil fuels to domestically produced electricity,’’ Dr Gaynor says.

"Common misconceptions about electric vehicles are that they are slow, lack power, take a long time to recharge, lack range, and are not very stylish.  The exhibits, demonstrations, and racing at Evolocity will definitely deal a blow to these misconceptions.

"We have ongoing electric vehicle based projects at the university which will be beneficial in providing a technology platform that motivates student involvement and gets students thinking about energy efficiency and sustainability in engineering applications. Our students will then take what they have learned and apply this in their future careers.

"Three students from our department, Blair Bonnett, Michael Frampton and Matthew Barham, will take be entering an electric go-kart into a performance-based competition against other karts from other tertiary institutes and from the private sector,’’ Dr Gaynor says.