A University of Canterbury designed Springfree trampoline has won the Best of the Best prize in one of the world's largest product competitions. 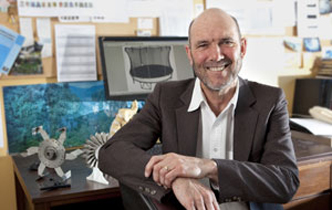 A University of Canterbury designed Springfree trampoline has won the Best of the Best prize in one of the world’s largest product competitions the annual international Red Dot Awards for 2014.

The safety trampoline designed by the university’s Professor Keith Alexander stood out from 4815 entries from 53 countries and received the Best of the Best honours for its highest quality and ground-breaking design.

"It’s great to be recognised by Red Dot for the Best of the Best in international product design. This award reflects the innovative and revolutionary design that is the Springfree trampoline and rewards the many years of hard work and commitment by the company and our University team.

"The trampoline is safe by design, offering new technology combined with a patented safety system to bring parents and children a brand new trampoline design. After years of research and development, we eliminated the major risks of injury associated with traditional spring-based trampolines.

This award will be presented in Essen, Germany, on July 7.

Professor Alexander has won the New Zealand Engineering Innovator of the Year award for his spring free trampoline invention, which now sells around the world and has won seven international awards including the Child Product of the Year in the United States.