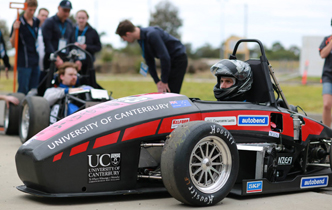 The University of Canterbury’s 2014 engineering car has begun track testing in preparation for the international university design, build and race car competition in Melbourne later this year.

The Canterbury mechanical engineering students entered the annual competition for the first time last year, winning the inspired engineering trophy. Their car was named the number one ranked rookie car in the world, from 500 universities competing in 10 competitions held worldwide.

Team Principal and PhD mechanical engineering student Tim White says their 2014 car has just had its first track test. Last year’s car reached 100km in well under four seconds and had a top speed of 140 kilometres per hour.

"This year we aim for a top three placing in the competition. That is a big ask as there will be a strong field of 25 university teams from countries such as Australia, New Zealand, Poland, South Korea, India and Japan,’’ White says.

"We have tried to design and manufacture as many components ourselves because it is looked on favourably by the design judges. The car could be built from off the shelf parts but we designed and built 80 percent of the car ourselves.

"We have more than 40 students involved in the team, similar to a Team New Zealand yachting operation. We have a technical director, three technical teams focused on the chassis, the powertrain, and electrical and aero. In a non-technical capacity we also have a business team made up of commerce students.

"We have seven women on the team. One is an aerodynamicist and the others make up our business team.  The 2014 car will be publicly launched in November. We will air freight it to Melbourne in late November and the competition will be run between December 11 and 14.

"Aerodynamics and a lot of data acquisition are big focuses for us this year. We also have an exciting powertrain development that will remain top secret until the launch.

"Our team gains skills by being part of a large real world complex project prior to leaving university. I believe it is the most important activity inside mechanical engineering, aside from the core degree. It’s a major operation. It took us about 10,000 hours to design and build last year’s car,’’ White says.

"We have had great feedback from employers and companies who have employed some of last year’s team members. The employers can see a noticeable difference in those graduates, distinguishing them from other mechanical engineering graduates who have not taken part in the project.’’

People interested in following the team’s progress can find out more at: https://www.facebook.com/UCMFSAE.