A professor from the world's number one rated university will have her book published next year featuring University of Canterbury physics expert Professor Roy Kerr. 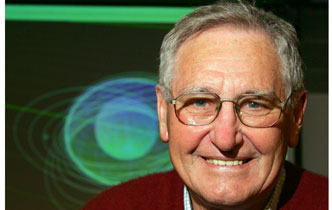 A professor from the world’s number one rated university will have her book published next year featuring University of Canterbury physics expert Professor Roy Kerr.

Massachusetts Institute of Technology’s Professor Marcia Bartusiak will release her book, in honour of the 100th anniversary of general relativity.

The book, The Biography of a Black Hole: How the Most Hated Idea in Physics Came To Be Embraced, will highlight the achievements of Canterbury Emeritus Professor Roy Kerr who last year became the first New Zealander to receive the Einstein Medal from the Albert Einstein Society in Switzerland.

The Kerr Solution has come to be regarded as the most important exact solution to any equation in physics and has been pivotal in understanding the most violent and energetic phenomena in the universe.

Kerr has made other significant contributions to general relativity theory, but the discovery of the Kerr black hole was so remarkable as to compare with the discovery in physics of a new elementary particle with more than 100 million trillion black holes in the observable universe, his achievement has been of crucial importance for science.

Professor Bartusiak says she has written about the 50 long years it took for the black hole to get accepted as a real object in the universe.

"I spend a chapter in the book on Roy Kerr's historic work in 1963 in finding the solution for a rotating black hole from Einstein's equations of general relativity.

"It was a watershed moment in the field, one that led to great advances in modelling the holes later found in the universe.

"Relativists around the globe were in awe of his accomplishment and today recognise it as one of the greatest achievements of their field. Nobel laureate in physics Subrahmanyan Chandrasekhar called this discovery the most shattering experience of his scientific life. Kerr's solution provides the absolutely exact representation of untold numbers of massive black holes that populate the universe.’’

Professor Bartusiak’s account of Kerr's accomplishment will be featured in her book to be published by Yale University Press.