A super large moon tonight may produce some post-quake flooding in low lying parts of Christchurch. 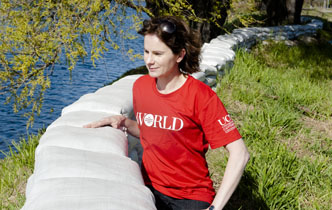 A super large moon tonight may produce some post-quake flooding in low lying parts of Christchurch.

A team of University of Canterbury and international researchers following post-earthquake flooding will be using this once-in-an 18.6 year opportunity to study the effect that high sea levels have on the drainage systems of low-lying coastal cities."Over the last three months people may have noticed that our planet has been basking in the night time light of a so-called super moon,’’ Dr Hart says.

"This phenomenon occurs once every 18.6 years when the moon’s orbit brings it closer than usual to Earth, making it appear bigger and brighter than usual, keeping coastal scientists awake at night, pondering the terrestrial implications.

Tidal water level variations on Earth are driven by the gravitational pull of our moon, with a little help from its bigger but more distant ocean-moving partner, the sun. As a consequence, a super close moon means super high and super low tidal water levels for planet Earth.

Dr Hart and Dr Christopher Gomez from the University of Canterbury’s geography department have been working with PhD student Su Young Ko and civil and natural resource engineers Dr Sonia Giovinazzi and Dr Tom Cochrane to understand the changes in Christchurch’s drainage network after the earthquakes.

Dr Giovinazzi, an engineered lifelines expert, is helping to understand the role of Christchurch’s post-quake storm-water, wastewater and road systems in events such as the March 2014 Christchurch floods. Dr Hart, along with world-renowned tidal expert Dr Do-Seong Byun of the Korea Hydrographic and Oceanographic Administration, is investigating connections between urban flooding and low-lying coastal plains with high water tables, rising sea levels and liquefaction-prone land.

"Measuring this event is really important as it will give us a proxy to understand how effective (or ineffective) our drainage system will be under elevated sea levels. Many people overlook that higher sea levels mean higher below-ground water levels and weaker river mouth outflows,’’ Dr Hart says.

"With future sea level rises, this means that the spatial extent of flooding and liquefaction hazards will be creeping further inland across low-lying, earthquake-prone coastal cities such as in Christchurch and Tokyo and river dredging solutions will not be a feasible option for low lying areas.’’