A University of Canterbury health sciences PhD student is investigating a different approach to solving behavioural and emotional problems in young children. 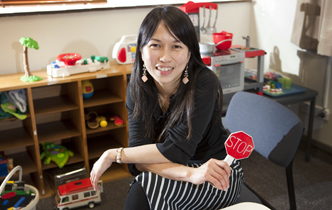 A University of Canterbury health sciences PhD student is investigating a different approach to solving behavioural and emotional problems in young children.

Vanessa Loh is working with parents of young children with behaviour problems. She is using a new play-based approach different from the usual interventions, to help improve child behaviour which may be of significant interest to parents and the community.

A high number of children in New Zealand have behavioural problems. A Dunedin study found 30 percent of seven-year-olds had behaviour problems.

Without sufficient support or intervention, parenting a child with behavioural problems is a challenging and exhausting task, Loh says.

"Preliminary results from the families who took part in the study show substantial improvements in children’s behaviour, including their non-compliance, temper tantrums and self-esteem.

"One parent said the programme helped her immensely, especially to make her stop and take stock of her feelings. She said she had become a much better parent, more calm and better able to deal with situations easily.

"Another parent said: `I have changed from a controlling mother to a mother who is more able to understand my children and their struggles. I have not been angry since I joined the training’.

"Others said they felt better about themselves as parents  and that the new strategies not only worked for their children but also helped them remain calm and confident.’’

The parents’ experiences suggested that parents can be a therapist for their children by using play to initiate self-directed change and behavioural and emotional regulation in their children and also to improve their children’s self-worth.

Her project will be an experiential process for parents and children. She will provide a free set of play session toys and a live demonstration of child-centred play session with the child for each family.

To better support the families, some sessions can be carried out at the family home, if preferred. Parents who have concerns about their children’s behaviour and want to be part of the study can contact Loh at the University’s School of Health Sciences.