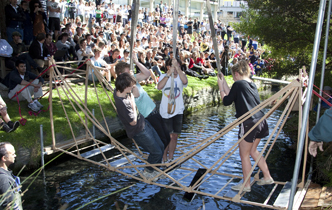 A bridge being tested by students at the University of Canterbury.

More than 500 people are expected at the University of Canterbury’s annual student bridge building competition, civil engineering’s event of the year, held on campus this week (20 August).

Organiser and senior lecturer in structural engineering Dr Alessandro Palermo says about 180 civil engineering students have designed and built bridges for the event.

Bridge building has been one of the litmus tests for second year UC civil engineering students for almost 20 years. The bridge competition requires students to design, construct and test a bridge which sustains two people but fails with three people on it.

In 2009, Dr Palermo changed the rules of the competition and introduced creative designs and aesthetics. A judging committee will make awards for the best aesthetic and structurally innovative bridges. He says the aim of the event is to stimulate creativity and innovation in the next generation of bridge engineers.

"The University of Canterbury has produced some prominent bridge designers who are in the front line with the Christchurch rebuild, including Mike Cowan, head of the bridge engineering division of OPUS (Christchurch) and Nik Stewart, head of bridge division of BECA (Christchurch)," Dr Palermo says.

The careers of many New Zealand engineers started with UC's bridge building competition on campus.