UC scientists have discovered that a Malaysian jumping spider, Paracyrba wanlessi, specialises at dining on mosquitoes. 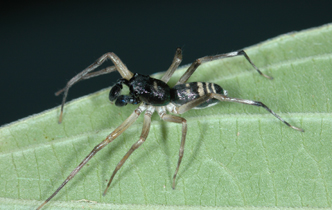 University of Canterbury scientists Professor Robert Jackson and Dr Fiona Cross (Biological Sciences), along with colleagues from Singapore, China and Malaysia, have discovered that a Malaysian jumping spider, Paracyrba wanlessi, specialises at dining on mosquitoes.

UC scientists had previously discovered an East African jumping spider, Evarcha culicivora, that craves blood-carrying adult mosquitoes, but Paracyrba wanlessi is now the first and only predator known to specialise at preying on all of the active stages of the mosquito, from the water-dwelling mosquito larva and pupa right through to the flying, blood-feeding adult.

“This is remarkable because a mosquito larva or pupa living in water is a very different animal from the active flying adult mosquito that pesters us in its search for blood,” Dr Cross says.

“The spider doesn’t need to learn how to identify and capture these different stages of the mosquito. We gave the spider the choice between lots of different prey and it consistently went for mosquitoes, regardless of whether these mosquitoes were adults or juveniles.”

In Malaysia, Paracyrba wanlessi lives in fallen bamboo shoots where water enters the wood through small holes. This is an ideal place to find juvenile mosquitoes in water, as well as adult mosquitoes that return to the water to lay their eggs.

Dr Cross says that, away from water, Paracyrba wanlessi stalks an adult mosquito by gradually creeping up on it and then, when the time is right, pouncing on the mosquito. However, when targeting a juvenile mosquito in the water, Paracyrba wanlessi adopts a different strategy. It sees the prey, moves to the water’s edge and then waits to make an ambushing attack when the prey comes near.

“Finding predators that single out mosquitoes as preferred prey is especially interesting to people because they kill the vectors of some of the most notorious human diseases, with malaria being at the top of the list,” she says.

“We can’t say at this stage whether Paracyrba wanlessi will be useful in the context of mosquito control, but the most important first step is to learn more about the biology of this unique predator.”

Professor Jackson says although there is only one jumping spider in Malaysia, and another in East Africa that are currently known to single out mosquitoes as preferred prey, jumping spiders are found in most parts of the world, with about 5600 species having been named.

“We know almost nothing about the preferences of the vast majority of these spiders. With these spiders, there are almost surely many surprising examples of predatory specialisation waiting to be discovered,” he said.