Researchers to simulate impact of earthquakes

University of Canterbury experts will next year use its BlueFern computer to simulate what happened under the ground during the Canterbury earthquakes. 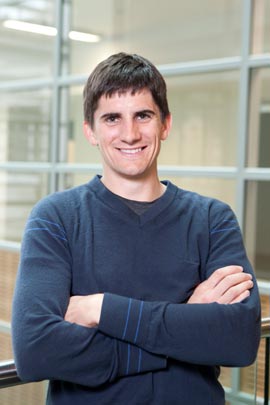 University of Canterbury experts will next year use its BlueFern computer to simulate what happened under the ground during the Canterbury earthquakes.

Civil engineer Associate Professor Brendon Bradley says the aim is to use advanced simulation methods to understand the way in which seismic waves radiated from the earthquakes across the Canterbury Plains and interacted with liquefiable soils near the surface that caused significant damage.

"We want to understand the relative contribution of the wave propagation in rocks deep beneath the Canterbury region, or the soft liquefiable soils beneath Christchurch, that were the predominant cause of the extreme levels of ground shaking."

His research will have a national and international impact in the assessment and mitigation of earthquake hazards in major cities.

Professor Bradley has spearheaded vital research following the earthquakes and was recently named the New Zealand Young Engineer of the Year at the national Engineering Excellence Awards.

He has led a study on prediction models, re-evaluating Christchurch’s seismic hazards, documenting the behaviour of engineered structures and quantifying seismic design loadings for the rebuild.

Professor Bradley’s work is providing guidance in the way people think about earthquake resistance in a seismically active environment. His work is an example of the way engineers shape the world and make it safer and sustainable.

He is considered an international research leader in several emerging fields of earthquake engineering and has been a member of the New Zealand reconnaissance teams for overseas natural disasters including the 2009 Samoan tsunami and 2011 Japan earthquake.

"We are also examining the impacts of topographic effects which occurred in Christchurch’s Port Hills and produced large shaking and slope instability that resulted in red zoning of residential areas. This is not just of interest for Christchurch. The impact and consequences will be likely greater in future earthquakes in the Wellington region, for example, where a significantly greater portion of the urban area occurs in topographically irregular terrain."

Last year, Professor Bradley received $800,000 of Rutherford Discovery Fellowship research funding to investigate the mysteries of unresolved ground motion and geotechnical case-histories from the 2010 and 2011 earthquakes.

He is applying world-leading research expertise to understand severe ground motions in the Christchurch urban area and extensive liquefaction and damage to structures and infrastructure.

Earlier this year he became the first New Zealander to receive the Shamsher Prakash Foundation Research Award, given annually to an engineer, scientist or researcher from anywhere in the world under the age of 40.