University of Canterbury honours students are investigating the feasibility of free bus services for students in Christchurch. 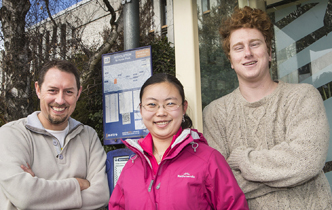 University of Canterbury honours students are investigating the feasibility of free bus services for students in Christchurch.

A pivotal aspect of the project is a survey to be undertaken by all university staff and students.

Christchurch does not offer a specific student subsidy, partly because fares are relatively cheap compared to Auckland and Wellington.

Having a free rather than a discounted service can be quite a game-changer to travel patterns. This study is a follow-up to similar research undertaken back in 2005 by another University of Canterbury postgraduate student, which showed promising interest and feasibility for such a scheme.

Students Matt Wilkins and Na Zhou are carrying out research supervised by Dr Glen Koorey, who is a member of the Christchurch Passenger Transport Advisory Group.

"Things have changed quite a lot in Christchurch since the 2005 survey so there is a need to update the findings. We also want to tap into perceptions from prospective university students still at high school of the value in such a scheme which was not investigated last time,’’ Wilkins says.

"I am aware of a free bus scheme that operates in Palmerston north for Massey University students. Such schemes are common overseas including many North American campuses. A number of central city areas also operate free bus services. Christchurch used to have its own central city electric Shuttle.

"Most importantly we're seeking survey responses from those who would be interested in such a scheme because they already use the bus, and those who wouldn't. We need to be able to extrapolate some findings about the demand and support from a reasonably representative sample of staff and students.

"A transport survey carried out in 2012 found that a large portion of people said they would support a subsidised bus programme that would encourage them to use the service. Christchurch is one of the few cities which does not offer any subsidy for students,’’ Wilkins says.

Dr Koorey says the 2012 study is a regular University of Canterbury travel survey undertaken every four years and is used for campus transport planning purposes.

"It is essentially a census of travel to university, as well as asking questions about a broad range of travel behaviour issues and options. We are using the data from that survey to help inform our findings here. About five percent of staff and 10 percent of students use the bus to get to the University of Canterbury,’’ Dr Koorey says.