Unravelling the rich history of one of Christchurch's iconic precincts is the focus of the latest book from Canterbury University Press (CUP). 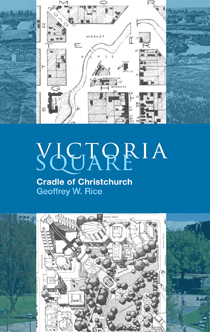 Unravelling the rich history of one of Christchurch’s iconic precincts is the focus of the latest book from Canterbury University Press (CUP).

Victoria Square: Cradle of Christchurch, written by historian Dr Geoffrey Rice, explores the only city square in the world with a river running through it, and the rich and varied history of this unique civic space.

“It is a thoroughly-researched piece of urban history, exploring the tension between public and private interests in the development of a civic square over more than 160 years,” says Dr Rice.

“As the town’s market place, Victoria Square was the commercial and official centre of early Christchurch, with the first police station, public works office, immigration barracks, law courts and fire station. It was the cradle of Christchurch.”

Until the earthquakes, Victoria Square was regarded as the most successful urban space in New Zealand and in Australasia. Since the earthquakes of 2010 and 2011 the square has undergone dramatic changes with all the buildings on the square’s eastern side, and most of those along the south, being demolished.

“I have written this book mainly for Christchurch residents and visitors, to remind them of what happened in this part of the central city and how its appearance has changed radically over a period of time, not once but in three or four phases.”

Dr Rice brings to life many of the stories and events connected with Victoria Square and the colourful personalities who have lived and worked there during its 150-year history.

This lively and entertaining book is illustrated with 250 photographs, many never before published, and shows Dr Rice’s deep knowledge and love for Christchurch city.

“I was struck by the richness of the photographic record for Victoria Square and wanted to showcase it and the history of this magnificent centre of Christchurch,” says Dr Rice.

“Christchurch has lost a lot of its heritage buildings as a result of the earthquakes and demolitions, but it still has a rich history waiting to be revealed from archives and newspapers. This is my contribution to that historical rediscovery.”

About the author:
Geoffrey Rice is adjunct professor of history at the University of Canterbury, where he taught for nearly 40 years until his recent retirement. He has written illustrated histories of Christchurch and Lyttelton, a biography of Sir Heaton Rhodes, and two books about crimes and scandals in nineteenth-century Christchurch, all published by Canterbury University Press. His account of the 1918 influenza pandemic in New Zealand, Black November, was shortlisted in the history section of the 2006 Montana New Zealand Book Awards.

You can hear Professor Rice talking about the book on NewstalkZB here.