University of Canterbury's distinctive Butterfly Building has been remediated and will be officially reopened later this week by Communications and Information Technology Minister Amy Adams. 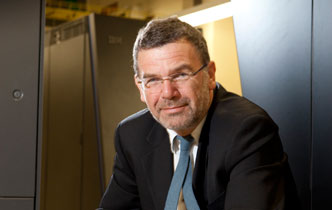 University of Canterbury’s distinctive Butterfly Building has been remediated and will be officially reopened later this week by Communications and Information Technology Minister Amy Adams.

The building – to be renamed the Angus Tait building - was first opened in May 1966 and following the earthquakes will be the home of the University’s BlueFern supercomputer team. The BlueFern computer is one of the most powerful in New Zealand. The building will be officially reopened on Friday, July 4.

New cellphones possess four processors and most laptops or and desktops have two to four processors. Canterbury’s BlueFern supercomputer has 8192 processors to form a fast network. BlueFern director Professor Tim David says he and his research team have access to a super computer overseas which has 786,432 processors.

"This is the Blue Gene at the Argonne national labs in Chicago. It is number five in the world list of the fastest supercomputers. The Chinese have the number one spot. We also have access to one in Melbourne which has 65,536 processors.

"We could not have got access to these supercomputers without having a similar machine here. To gain access to these machines we have to show that we know what we are doing and that our software can handle all those many processors.

"We have received 2,000,000 core hours access to the Argonne supercomputer in Chicago. It means that we can run software on the supercomputer on say 100,000 processors for 20 hours. We are researching heart disease progression through computer modelling which could become a key tool in predicting, treating and preventing coronary heart disease.

"Heart attacks occur because the arteries that carry blood to the heart become narrower and narrower allowing less and less blood through until in the end they get blocked and the heart tissue is starved of oxygen.

"By computer modelling we connect millions of cells making up a part of a coronary artery. This research could help doctors understand why coronary arteries get blocked at certain positions in the arterial tree.’’

Professor David and his team have established an international reputation with the computer modelling of cell physiology and have collaborated with other researches overseas.

BlueFern is difficult to compare with the specifications of the first IBM 1620 computer at Canterbury in 1962 which had a capacity of just 20,000 decimal digits and possessed the equivalent of 20 kilobytes of storage.

The IBM 1620 computer weighed 800 kilograms and was two metres high. It cost about as much as 10 average houses. It had no disks or tapes, all information being stored on punched cards and had no operating system. Word processing wasn't invented, nor were spreadsheets, email or the internet.

From 1973 until 1980, the University had a Burroughs computer that cost about a million dollars, or the cost at the time of up to an average 40 houses. Further changes and upgrades have continued over the last 34 years. Key IT people who have played important parts in growing digital technology at the university were Robin Harrington and Bruce Moon.