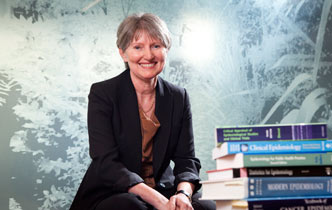 The number of women diagnosed with breast cancer will increase because of the increasing number of older people and increasing size of our population, the University of Canterbury’s School of Health Sciences researchers James Hayes and Professor Ann Richardson say.

"A strategy to promote regular physical activity and reduce obesity could also have other benefits, such as reduced risks of cardiovascular disease and diabetes. Given the additional health benefits associated with such changes, public health interventions towards achieving them are reasonable,’’ Professor Richardson says.

Physical activity reduces the risk of breast cancer. However the type and amount of exercise required for a measurable impact on incidence rates remains unknown.  It is also unclear whether there are specific ages in a woman’s life where physical activity will have a greater protective effect, Hayes says.

"In New Zealand, physical inactivity is the second most important cause (after tobacco) of healthy years of life lost. The increasing prevalence of obesity in New Zealand has been attributed to changing dietary and physical activity patterns, reflecting an environment that facilitates overconsumption of energy-dense foods and drinks and reduces opportunities for physical activity,’’ Professor Richardson says.

This research, undertaken at the University of Canterbury School of Health Sciences, was supported by the Canterbury Medical Research Foundation, Helen Poole and Ian McDonald Trust, and the Wayne Francis Charitable Trust.