A leading New Zealand Olympic academic has been honoured by the International Olympic Committee. 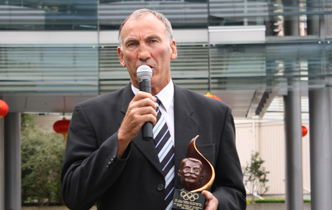 A leading New Zealand Olympic academic has been honoured by the International Olympic Committee.

University of Canterbury (UC) Associate Professor Ian Culpan has won the IOC Trophy for his services to the Olympic movement.

The IOC Trophy celebrates and honours the 150th anniversary of the birth of the Modern Olympic Movement’s founder Baron Pierre de Coubertin.

The trophy was awarded in recognition of Professor Culpan’s outstanding long-term research and teaching work focusing on Olympism.

His work was considered by the IOC to have left a significant academic and professional legacy particularly in the research field of Olympism education drawing on a critical pedagogy.

He was the driving force behind New Zealand being the first country in the world to mandate Olympism within a national curriculum statement for physical education.

In 2000, Professor Culpan was awarded an IOC Trophy for his sport and education research and teaching. Other New Zealanders who have received an IOC Trophy include Sir Wilson Whineray and broadcaster Keith Quinn.

Last year, Professor Culpan took up a visiting professorship at one of Europe’s oldest universities, Charles University in the Czech Republic. This year he has been invited to teach into the International Masters programme on Olympic Studies through the universities of Loughborough (UK), Lyon (France) and the German Sports University of Cologne.