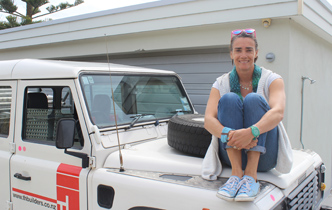 A mother who lost her 12 year old daughter in a car crash this year will give a keynote talk about resilience at the second annual New Zealand tertiary engagement summit at the University of Canterbury later this month.

Lucy Hone of Christchurch lost her daughter Abi in the collision at Rakaia. Abi’s friend Ella Summerfield and Ella’s mother, Sally, also died in the crash.

Hone says having lived in Sumner during Canterbury’s earthquakes and recently suffered the loss of her 12-year old daughter in a tragic road accident, gave her first-hand experience of how community engagement relates to resilience.

"I had learned a great deal about the importance of communities for resilience from my masters programme at the University of Pennsylvania. But I had no conception of how the theory played out in the real world until the earthquakes hit,’’ Hone says.

"Given that I started my PhD three weeks before the February quake and was approaching the end of it when Abi, Sally and Ella were killed, I now have first-hand knowledge and experience of the benefits of close-knit, fully-engaged communities.

"We could not have got through these past five months without the amazing generosity, kindness, compassion and empathy shown to our family by the Sumner community and also through the wider city where we have all felt so supported."

"It's important for people to realise that community involvement takes many forms. It's not just about official volunteering, where you are required to regularly commit, some people just aren't able to do that. But there are so many ad hoc ways to give your time, energy and resources to communities. Whether it is sharing some baking with a neighbour, doing your stint on pool duty, driving friends' kids to sport, or having them to stay overnight when the parents are away.’’

Hone's husband, Trevor, and his building team gave up their time for free last year to build the local skate ramp for children.

"While the focus of my PhD is not specifically on community resilience, my epidemiological work at the Human Potential Centre in Auckland has produced fresh insights into how volunteering relates to wellbeing in New Zealand.

"As part of my work at the Human Potential Centre we have conducted New Zealand's first ever national wellbeing survey. We have analysed the data on the Sovereign Wellbeing Index which is a comprehensive survey completed by a representative sample of over 10,000 adults from all over the country.

"It showed significant benefits from being part of a close community. For example, those people who respond that they feel close to people in their local area are four times more likely to experience the highest levels of wellbeing, even after taking their age, region, income, gender and job function into consideration. They are also twice as likely to be scoring in the top 10 percent on measures of resilience.’’

Hone says volunteering isn't just good for communities that receive the direct benefits but research indicates it also benefits the givers. International research shows that volunteering is strongly associated with wellbeing and resilience on a personal level, and the Sovereign data shows there's a clear link here in New Zealand too.

"I like to think of resilient communities as super-organisms where the whole is so much stronger, and more able, than the sum of its individual parts. Thriving communities are full of people who give back, on so many different levels and in a multitude of ways - some small, some huge, but every act makes a difference,’’ Hone says.