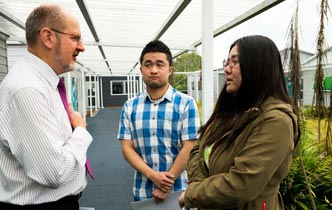 UC International College (UCIC) has announced the first two winners of the Navitas Academic Scholarships with Zhang Yuting and Wang Jiang Jun receiving the scholarships at a ceremony at the College yesterday.

Zhang Yuting is completing her UCIC programme in Commerce this semester and will pathway to the second year of her University of Canterbury Bachelor of Commerce degree in February 2015. She wants to major in taxation, but is also considering a double major.

Wang Jiang Jun is completing his UCIC programme in engineering and will pathway to his first professional year of his University of Canterbury Bachelor of Engineering with Honours degree in civil engineering in 2015.

UCIC College Director and Principal, Professor Peter Cottrell, presented the students with their certificates at an end of year celebration for all UCIC students and staff at the College today.

"Yuting and Jiang Jun have achieved exceptionally good academic outcomes and are ideal candidates to demonstrate the advantages of pathway programmes to University of Canterbury degrees,” Professor Cottrell says.

“The benefits for international students are enormous. UCIC is based on campus so students are immediately immersed into student life in New Zealand. Students have full access to University of Canterbury services and facilities but can also expect the renowned UCIC benefits, such as smaller class sizes, more support and an extended academic year. This truly gives our students the right tools to adapt and succeed," Professor Cottrell says.

UCIC offers a range of programmes in science, commerce and engineering, delivering the equivalent of the first year of University of Canterbury bachelor’s degrees. On successful completion UCIC students pathway into the second year of their chosen bachelor degree at the highly ranked University of Canterbury. UCIC also offers a Foundation Studies Certificate for those students who have completed the equivalent of NCEA Level 2.