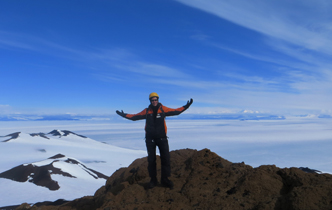 Dr Liggett is one of many academics at Canterbury who visit the ice every summer for teaching and research. More than two dozen Canterbury postgraduate students also carry out research at or around Scott Base every year.

Dr Liggett was one of the representatives of the Antarctic science community who participated in an international horizon scan that was organised by the Scientific Committee on Antarctic Research (SCAR) which assembled in Queenstown earlier this year 75 scientists and policymakers from 22 countries, including experts from the University of Canterbury, to agree on the priorities for Antarctic research for the next two decades and beyond.

This is the first time the international Antarctic community has agreed on the way forward and the outcomes have been published in the science journal Nature.

"A number of New Zealand researchers took part in the workshop in Queenstown and many are leaders within the SCAR community in their own right. The top 80 Antarctic science questions decided on during the SCAR retreat will have a bearing on New Zealand Antarctic research,’’ Dr Liggett says.

Once seen as a desolate place frozen in time, Antarctica is known to be experiencing relentless change such as loss of ice, changes in ocean circulation and recovery of atmospheric ozone which will have global consequences for climate, sea level, biodiversity and society.

The Southern Ocean has important roles for the planet by connecting the world's oceans and transferring heat and carbon dioxide from the atmosphere to the deep ocean. Nutrients carried north support the base of the oceans’ food web. The world’s oceans are becoming more acidic as carbon dioxide dissolves in sea water.

Access to remote locations in Antarctica for research remains to be challenge, from a logistics, economic and health-and-safety perspective. An increased use of autonomous vehicles and observatories that can reach remote locations, e.g. underneath ice shelves or in the deep sea, might become necessary.

Antarctica continues to be seen as a place to assert national interests. Countries such as Belgium, China, the Czech Republic, India and South Korea have recently established new stations. Germany, the United Kingdom, the United States and others have replaced ageing ones; and Japan, South Korea and South Africa have built or replaced ice-capable ships.

However, the Nature journal says scientists from many other nations lack access to Antarctica. Twenty-nine countries participate in decision-making and another twenty-one have agreed to abide by the Antarctic Treaty. Although this represents about two-thirds of the world population, it comprises less than one sixth of the 193 member states of the United Nations. Countries in Africa and the Middle East are notably under-represented.

Questions related to countries’ national interests in Antarctica, the effectiveness of existing environmental regulation and Antarctic tourism management fall within the area of Dr Liggett’s research and will be the focus of her work over the next couple of years.