Six highly talented University of Canterbury fine arts graduates are stepping out, with considerable potential and already some success, onto the national and international. 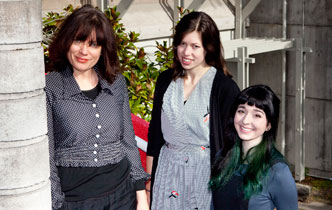 Six highly talented University of Canterbury fine arts graduates are stepping out, with considerable potential and already some success, onto the national and international stage with the help of scholarship funding.

Jenkin recently majored in graphic design, with an interest in social practice, where art becomes a means of creating opportunities for participation and interaction.

She is part of the Christchurch art collective, The Social, and recently ran an Inconvenience Store with Gap Filler. She founded local art space Room Four, which has been running for more than two years.

She is using the funds to travel to New York today (Tuesday) to attend Open Engagement, an annual conference that aims to expand the dialogue around socially engaged art making.

McFetridge has a fine arts honours degree, majoring in photography and is an emerging photo-media and book artist, writer and curator in Melbourne.

She will attend the New York Art Book Fair in September and spend time in archives at the International Centre of Photography. She will visit galleries and institutions that show work by artists who have been highly influential to her practice, visit art libraries, attend openings, and arrange meetings with artists and publishers.

Wells will also travel to New York in September. Currently studying towards a masters degree in film making, she plans to attend lectures and workshops at several art colleges and visit the studios of students and artists in residence. Some of her work has been entered in a couple of film festivals that are taking place at the time.

Harris graduated last year with a masters degree in painting. She works in a symbolist, gestural manner and plans to travel to New York, Boston, Los Angeles and Yucca Valley in order to extend her practice.

Dewhirst graduated with an honours degree in painting. She explores the spatial relationships between pattern and colour and was recently shortlisted for an interview at the Royal Academy of Arts in London. She will use the scholarship to help fund a digital printing course in London, where she will also visit the Matisse exhibition at the Tate Modern.

Millwood graduated with a fine arts honours degree in 2012. She primarily works within the fields of printmaking and painting and is represented by the Suite Gallery in Wellington. She is headed to New Orleans at the end of 2014 to attend the third Prospect art biennial. Prospect was created following Hurricane Katrina as part of the push to strengthen the creative arts.

Professor Paul Millar, Head of Humanities and Creative Arts at the University of Canterbury, says these graduates are passionate, talented, articulate and potentially the future face of New Zealand art.

"Here are six highly talented artists who have excelled at the University of Canterbury’s Art School and they did their degrees through the earthquake years which have inevitably shaped their development.

"With their talents and the New Zealand approach to making art the sky could be their limit. These travelling scholarships recognise that the recipients belong to a long line of great University of Canterbury Ilam School of Fine Arts graduates, which includes painter Shane Cotton, sculptor Peter Robinson, interdisciplinary artist Ruth Watson and film maker and multi-media artist Vincent Ward,’’ Professor Millar says.