A University of Canterbury fine arts graduate Elle Plank is the youngest person among the finalists in this year's Wallace Art Awards. 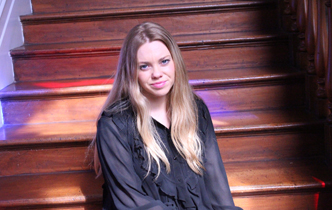 A University of Canterbury fine arts graduate Elle Plank is the youngest person among the finalists in this year’s Wallace Art Awards.

Plank, 24, who graduated from the university’s Ilam School of Fine Arts this year, was the youngest artist to reach the final 39 artists among 524 entries in the 23rd annual Wallace Art Awards.

“This is huge for my career as the Wallace Awards is one of the major events in New Zealand with a prize pool of almost $200,000. My work desks for the awards was a stop motion animation focusing on graphic design practices in the studio at Ilam, illustrating creative portraits of the owners of the desks,” Plank says.

“My works will form a part of the travelling show around New Zealand of selected seven winners and 32 finalists.”

“Her style is whimsical, subtle and clever form of portraiture using time-consuming stop motion. It is a sophisticated grasp of illusion and whimsy which makes the film humorous without being cute. Very impressive technically,” Tyler says.

Plank’s work looks at the creative concept of work desks which was formulated and produced within the design studio of Ilam at the University of Canterbury.

This is a benefit for New Zealand as the work travels and will be seen by many people around the country.

Plank is based in Auckland continuing with her art for galleries and exhibitions and also doing freelance work to make money by making her art commercially desirable.

“I am working for myself, for my own name and new brand – Elle Plank - which is utterly satisfying and exciting feeling. I am working on making my own dreams come true, not someone else’s.

“After graduating from the University of Canterbury, I was unsure what I wanted to do. People consistently asked me what I was planning on doing after I left university. I thought maybe I would work in advertising, a design firm or maybe television.

“I have discovered that it doesn’t actually have to be like that. I am happy to say that I am now a video artist, freelancing while continuing to make work fit for galleries and art exhibitions.”