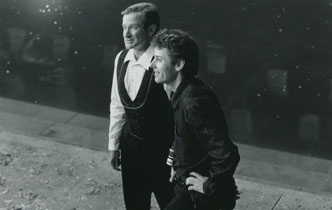 Professor Vincent Ward with Robin Williams on the set

Ward became friends with Williams during the shooting of his 1998 film What Dreams May Come, which received an Academy Award for best visual effects.

"Even if for a moment you forget this man’s extraordinary talent and wicked humour, if you have worked with him you know one thing: what a wonderful, extraordinary and kind man he was,’’ Ward, a University of Canterbury adjunct  professor, said from Australia today.

"Well-known actors have a choice. They can be kind to all of us who really don’t count, or generous to a man. Robin joked with the extras on the endless long  winter nights of their waiting around during the filming of What Dreams May Come, and would keep all of us jollied along, not for his own sake but for all of us.

"We joked about him - the stealth bomber that circled the set and quietly - and sensitively listened even when you weren’t aware of it. This was a far cry from the public image of a man renowned for  frantic verbal riff whom we have become more accustomed to hearing about.

"A gentle man, with a wild wit that comes from a place of both loneliness and affinity with other humans and their and his apparent absurdity, he was most of all a friend and I will miss him dearly,’’ Professor Ward says.

"On one of Williams’s last visits to New Zealand, he had breakfast with Professor Ward and his family at his hotel.

"He helped me try and raise money on kick-starter for a Shanghai Biennale art project, even going to the extent of recording himself on camera for it. It is unusual for someone of that fame to lend their name in the support of a personal project.

``On the set he would sit next to my mother so the chairs would go: director (me), Robin Williams and my Mum. He was always very kind to her,’’ Professor Ward says.