Excellence in IT education recognised

A University of Canterbury (UC) computer scientist has been awarded two awards at the inaugural New Zealand Excellence in IT Awards. 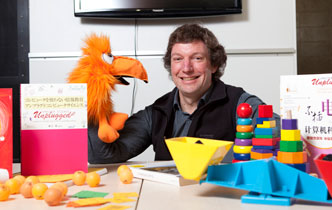 A University of Canterbury (UC) computer scientist has been awarded two awards at the inaugural New Zealand Excellence in IT Awards.

Professor Tim Bell (Computer Science and Software Engineering) scooped up the Excellence in IT Education and the President’s Award for Contribution to the IT Profession. The awards were presented by the Institute of IT Professionals (IITP).

Professor Bell says he is both humbled and surprised to have received the awards.

“Improving the education pipeline is the most effective way to improve New Zealand’s capability as a software producer.”

Professor Bell initiated and developed the Computer Science Unplugged project, which started 22 years ago, and has grown into a teaching tool that is used worldwide. It is used to teach the concepts of computer science to all ages without the use of computers.

New computer science achievement standards came into effect in New Zealand high schools four years ago and Professor Bell says he and colleagues have been doing everything they can to support teachers to deliver the new material.

“One of our main achievements is the “Computer Science Field Guide”, a free, open-source teaching resource that matches the new standards and provides teachers with exactly what they need.

“We are very interested in how to best teach in schools and support teachers. We have done a lot of research on this during the development of the new computer science standards in the last four years,” he says.

Professor Bell is currently working on how to better help students be prepared for computer science education by having the topic available in primary schools, and is researching suitable teaching methods for a typical primary school.