Christchurch is perfectly placed to be the cycling capital of New Zealand and a UC expert believes cycling in the city will continue to increase as new cycleways take shape. 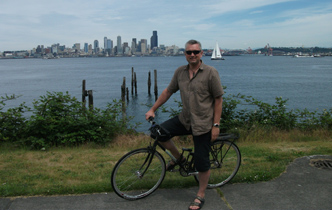 Christchurch is perfectly placed to be the cycling capital of New Zealand and a University of Canterbury expert believes cycling in the city will continue to increase as new cycleways take shape.

Historically Christchurch has been known as the cycling city and its natural geography means it should be perfect for cycling though it’s not perceived to be safe by a lot of people who currently cycle, Professor Simon Kingham says.

Professor Kingham, who has undertaken substantial research on cycling in cities, will give a public lecture about cycling on campus next Wednesday (11 June). View a preview video interview here.

"For many, the city is not seen to be safe by people who choose not to cycle at the moment. The Christchurch City Council says it will spend $70 million on 12 cycle routes which will take people from the suburbs into the city," Professor Kingham says.

"There will also be some that go around the city a bit like the orbiter bus route. They will be physically separated cycleways and they will be designed to make people feel safe and away from traffic.

"For people who bike on those routes it will be fantastic. It will make people feel safe and we know from research all around the world that if infrastructure is added more people will take up cycling.

We will still have gaps and parts of the city where we won’t have good infrastructure. So there will still be work to be done but hopefully this is the start of things.

"The recent census shows that we have actually bucked the trend of people cycling to work. It was 6.5 percent in 2006 but has now risen slightly to seven percent. So that’s great for Christchurch. It’s one of the highest rates in the country and comparable with many other cities around the world where people are making a real effort to increase cycling.

"The Canterbury Earthquake Recovery Authority plans for the central city should encourage people to cycle and the Christchurch City Council’s $70 million cycleways plan are a good start to get people travelling around and into the city. This needs to be the start.

"Countries and cities around the world are realising the importance of investing in cycling. In New Zealand some good cycling initiatives have been developed in Hastings and New Plymouth. Christchurch has huge potential.

"Copenhagen in Denmark is a great example of a superb cycling city where up to 40 percent of people make their journeys by bicycle. Parts of the Netherlands are doing well and new cities are on the up, such as Bogota in Columbia and the centre of New York is amazing. Adelaide is great too. It is becoming clear that if cities put in good infrastructure, people want to cycle,’’ Professor Kingham says.