Christchurch has suffered liquefaction in the past 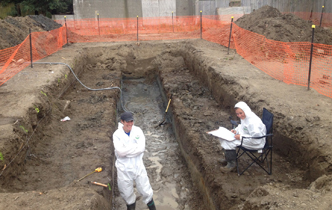 The June 5, 1869 Christchurch earthquake of about magnitude 4.8 or larger, was centred under Addington and caused significant damage. Geologist Julius von Haast, who had lived in Canterbury since 1859, described the earthquake as the most severe he had ever felt in the region.

Bastin has won the best student paper awards at the New Zealand Geotechnical Society Conference in Queenstown and she was awarded the Wellman research award at the society’s conference in Christchurch.  Her research is supervised by UC’s Associate Professor Mark Quigley and senior lecturer Dr Kari Bassett.

Bastin has been invited to work with global experts on liquefaction in the USA and has published several research papers in high profile international journals.

"Liquefaction in 1869 is a key finding of my PhD research. Prior to my work this had not been known or documented.

"Essentially, Christchurch can expect an earthquake that will cause liquefaction every 150 years. We do not expect this to be as large as the February 2011 event. When rebuilding Christchurch we have to recognise that parts of the city are highly susceptible to liquefaction therefore must plan for this accordingly.

"In TC3 areas they are doing this to some extent. However, I think it is important to note that the city has to evolve to address these issues otherwise we are doomed to repeat this costly lesson.

"As an example, the Cathedral spire was repaired from earthquake damage in 1881, 1888, 1901, 1922 indicating earthquakes pose a real hazard to the city. It is important we consider this when rebuilding as opposed to the old fixing the old mentality.’’

Trenching across liquefaction features within Avonside, eastern Christchurch, revealed multiple generations of liquefaction dikes. This indicates that recurrent liquefaction in 2011 occurred in the same zones of weakness as in the past, Bastin says.

"Many of New Zealand’s main urban centres are located near mapped and unmapped faults and are situated on sediments that are considered highly liquefiable.’’