Christchurch is now experiencing more frequent and severe flooding due to the impact of the earthquakes, University of Canterbury (UC) researchers said today. 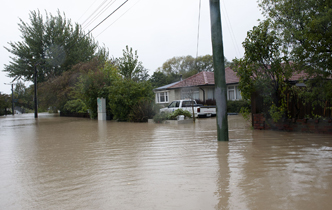 Christchurch is now experiencing more frequent and severe flooding due to the impact of the earthquakes, University of Canterbury (UC) researchers said today.

It is more than three years since the first earthquake on 4 September 2010 and earthquake-induced ground deformations such as lateral spreading, liquefaction, subsidence and uplift are posing an enhanced flooding threat to Christchurch.

City residents’ concerns about frequent flooding of their houses and gardens have been a topical issue in recent years.

A UC geography masters student, Su Young Ko, says increased flooding is not just because of the extreme and prolonged rainfall but, is also due to various other natural environmental processes such as tides, background sea level rise and sea storms.

"One of the primary contributors to increased flooding hazards in Christchurch are the earthquakes which resulted in subsidence in some areas, narrowing of channels and uplifting of river beds,’’ Su Young says.

Civil and natural resources engineer Dr Sonia Giovinazzi and geography researcher Dr Deirdre Hart have been investigating the city’s increased flooding hazard as a direct result of the earthquakes.

The cascading effects of the earthquake that led to changes in flooding hazard patterns across the city are being investigated as a key case study which involves Dr Christopher Gomez (Geography), Dr Tom Cochrane (Civil and Natural Resources Engineering) and Marion Gadsby (Environment Canterbury).

They are exploring flooding resulting from earthquake impacts on lifeline infrastructures, such as roads, waste, storm and drinking water, electricity and telecommunications systems, and the communities they support.

"Typically, cold fronts associated with low pressure centres propagate rather fast but this one is producing sustained rainfall over the region due to its slow progress.”

Dr Hart says this is the type of meteorological system that elevates sea levels locally at the same time as generating big waves off the eastern South Island.

"High wind speeds working on transferring their energy to the sea surface over several days makes for extreme coastal conditions. Where we had four metre wave heights a week ago, 12 metre high waves are now being recorded off Banks Peninsula.

"Compounding these effects, we are just coming out of a spring tide cycle where we experience our highest monthly tidal water levels,’’ says Dr Hart, former chair of the New Zealand Coastal Society.

Dr Gomez says his research shows that unfortunately such events are a scary reality for numerous coastal cities around the globe, such as Tokyo in Japan, Jogjakarta in Indonesia, and even Wellington in New Zealand.

"We all have vivid memories of what has happened recently in the UK and we have to learn to better manage such events.’’ Dr Gomez says.