A University of Canterbury commerce and law student, who produced a website to help young voters in next month's elections, will next week launch a mobile app. 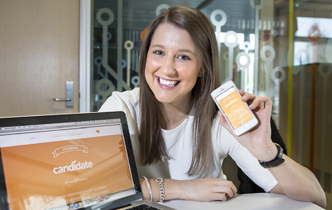 A University of Canterbury commerce and law student, who produced a website to help young voters in next month's elections, will next week launch a mobile app, Candidate, to provide more information for new voters.

Earlier this year, Canterbury student Hannah Duder received $10,000 from the Handley Foundation as part of the Shoulder Tap national recruitment campaign. Duder was not offered a job but was granted the $10,000 after pitching her idea during the process.

Duder used the money to develop the Candidate app and worked with the Shoulder Tap community and businessman Derek Handley to set up the Virgin Voter Collective after realising only a third of young people were expected to vote in this year's general election.

"The Candidate app will be launched on 20 August. The University's Innovators and entre organisations initially sparked my interest in entrepreneurship, innovation and app creation," Duder says.

"Innovators manager Dr Rachel Wright gave me the inspiration and belief to run with my ideas which gave me the confidence to apply for the Handley shoulder tap recruitment campaign.

"I have been in touch with all major parties to help develop my Candidate app. They have provided policy topics following a survey I put out to young people to see which topics were important to them. I have had responses from ACT, NZ First, Mana/Internet, National, Labour, Green the Maori parties. These parties will be represented in Candidate which will be launched at events in Auckland and Christchurch next week. We are looking for sponsorship as everything else is volunteer work.

"Candidate is a web-based app so it can be used on any cellphone, computer or tablet with an internet browser. Our aim is to get at least another 18,000 young people to vote otherwise the views of old people will be the ones that will win this election and that would really suck.

"Our Virgin Voter team has gathered some surprising data which shows youth voter decline is a much bigger issue than most people think. A lot of young people feel that politics and voting is quite boring and not relevant to their lives.

"We will be concentrating our efforts in electorates where there is critically low number of enrolled voters, with Auckland Central, Dunedin North and Wellington Central topping the list. Three Christchurch red zone affected electorates are also on the list.

"A lot of people are out there trying to get people my age get excited about voting in this year's election and we recognise that if we pool all the brains, numbers and activities then we can have a bigger impact."