A University of Canterbury spin out company Puteko has won an Auggie, an international augmented reality award, for its app that turns colouring books into 3D. 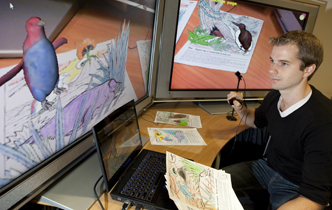 A University of Canterbury spin out company Puteko has won an Auggie, an international augmented reality award, for its app that turns colouring books into 3D.

Auggies are given out for the best augmented reality and wearable technologies, films, tools and hardware. This is the fifth year of the awards. The Auggie award included a prize of a one-year licence for DAQRI 4D Studio, an augmented reality content creation tool from the world’s leading augmented reality developer DAQRI.

The Puteko app presents a really well thought out, fun, inventive and novel use of augmented reality technology. One of its designers, University of Canterbury researcher Dr Adrian Clark, says that from the beginning their focus was on the user experience, rather than the technology. View a YouTube link of the app here: http://youtu.be/EGMjsYHD7Ak.

"We really wanted to enhance the creative experience of colouring, rather than just replace it with technology. We are constantly working to bring out more content in the form of pages and interactivity.

"There's been a number of underlying changes to the app which should improve the functionality and performance, particularly on older and less powerful mobile devices. We've also been working with augmented reality technology developers and doing our own development. We expect to announce more exciting news about these new technologies which will be coming out in an app update soon.

"In the coming months we're planning to release a page pack - Amazing Animals of New Zealand. This pack is based on the book of the same title by New Zealand artist Bruce Mahalski, which introduces a range of native New Zealand animals with colouring pages and information, and is targeted at primary and intermediate aged children.

"At the moment we have one page from the pack available, which features a pukeko, which is available for free with the app. The pukeko page has been extremely popular worldwide - since the release of the App early last year, on average the page is viewed by someone in the world every minute,’’ Dr Clark says.

The app technology was originally developed by Dr Clark at the University of Canterbury's Human Interface Technology Laboratory NZ (HIT Lab NZ). From there, the company Puteko was formed, and an app was developed from this technology, which is available for both Android and iOS devices, and has already had more than 540,000 downloads.