A University of Canterbury engineering PhD student is researching sports, such as table tennis, to ensure closer games for both better and less skilled players. 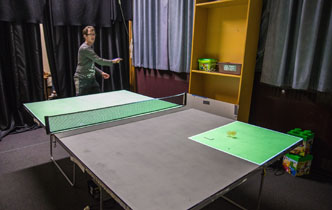 A University of Canterbury engineering PhD student is researching sports, such as table tennis, to ensure closer games for both better and less skilled players.

David Altimira has been researching in the university’s HIT Lab NZ to balance a game by giving the weaker player greater chances of success. He will present a paper to the 11th Advances in Computer Entertainment Technology Conference in Madeira, Portugal, in November.

As part of his project Altimira, who is collaborating with researchers from Melbourne’s RMIT University, changed the size of the table tennis bat and the table to make it more difficult for the better of the two players.

His supervisor, world croquet champion and University sports researcher Dr Jenny Clarke, says sensors were mounted under the table to detect and could project onto the table where the ball bounced and measured factors such as length of rallies and ball speed. He also used a ceiling-mounted camera to monitor other dynamics.

Dr Clarke says the research was aimed at getting more young New Zealanders to exercise. Nearly 11 percent of children in the 10 to 14 age group are obese and in adulthood, the proportion swells to 28 per cent.

"David also had a better player using a half-sized bat or for that player to have to aim for a target area much smaller than the usual size of a table tennis table if their lead stretched out to six points.

"A challenge can be more important than competition itself, especially if it is for fun. People might not like to play for competition but enjoy being challenged.

"The motive behind this research could benefit families where the younger children are generally less skilled. The same applies in a social setting where some friends are much more skilled than others. This new system makes it competitive and fun for everyone.’’

Altimira, who has studied computer science in Barcelona and an internship in Chicago, says he digitally reconfigured one side of the table tennis table to make the target area more restricted for the better player to balance the game up.

"This made it harder for the good player so overall we helped encourage people to do more physical exercise, which has mental, health and social benefits. Making it harder does not necessarily mean people will exercise more but by making physical activity more engaging it can increase people’s physical activity.’’