University of Canterbury engineering graduate Esther Warren has been named the Australasian Young Rail Engineer of the Year. 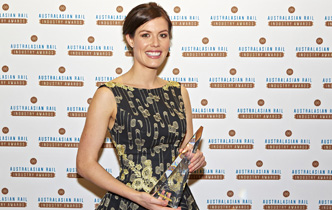 University of Canterbury engineering graduate Esther Warren has been named the Australasian Young Rail Engineer of the Year.

Throughout her eight year career Warren has worked on large scale construction projects in New Zealand, Queensland and Victoria including the $1.1 billion Gold Coast Desalination Plant and the $570 million Sugarloaf Pipeline. She was most recently part of the successful tender and delivery team for $650 million Regional Rail Link; City to Maribyrnong River Project as the occupation planner.

"I am a passionate promoter of the construction industry as a great place to work and grow a career as an engineer. I’m currently working for John Holland as a civil project engineer in Melbourne.

"Current female school leavers are well educated, incredibly socially conscious and very ambitious. They are much more motivated to choose a career where they can give back to their communities. Engineering is a social, creative and helpful career with globally recognised skills and a great pay check,’’ Warren says

"Engineering ticks a lot of career boxes for young women. It is the perfect balance of intellectual and practical work with strong connections to the community. I enjoy that I get to work and interact with people from all sorts of backgrounds. Engineering isn’t all hardhats and construction boots, although I do own several of each.

"I’ve seen more women engineering graduates entering the industry but it’s a slow change. The gender gap is huge and I still work with close to 100 percent men.

"I believe the presence of strong role models from a young age is vital to increasing female participation in engineering. The more women that are at the top of the ladder the higher we will shoot.

"There are a lot of women out there who would thrive as engineers. We need to educate our daughters from kindergarten on the possibility of a career in engineering. One of my favourite products I’ve seen is a toy called Goldiblox which has been developed to inspire an early interest among girls towards innovation and engineering.

"There's an appetite from government and industry to increase the number of women studying engineering. There are many awards and scholarships focused on supporting women studying engineering. I was awarded a scholarship through Fulton Hogan to help with my fees during my last two years of university. I think it’s time there were no male or female engineers but just engineers.

"My time as an engineering student at the University of Canterbury was one of the most memorable in my life where I formed my closest friendships. Canterbury’s engineering community was strong, supportive and full of mentors during my studies. This was important for me because engineering was a tough degree.

"The resilience that young students show is impressive. I cannot imagine what it must have been like in Christchurch after the 2010 and 2011 earthquakes with the added pressures of studying through a national emergency and the rebuild.

"It’s one of the most beautiful parts of the world and the geological history is an engineer’s playground. There aren’t too many places where you can get from ski slopes to surf in an hour,’’ Warren says.