A University of Canterbury student researcher is investigating how emerald rock fish in the Antarctic can adjust and survive the predicted global and sea temperature increase. 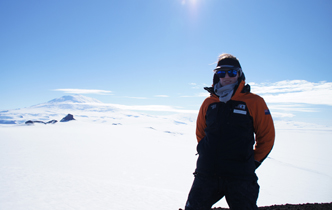 A University of Canterbury student researcher is investigating how emerald rock fish in the Antarctic can adjust and survive the predicted global and sea temperature increase.

After the formation of the Antarctic continent about 25-30 million years ago, seawater around Antarctica cooled to its current temperature of approximately minus -1.9°C degrees.

Canterbury postgraduate Charlotte Austin says Antarctic cod dominate the Southern Ocean and due to a wide range of predators including whales, orca, seals, penguins and other fish, they are vital to the Antarctic food-web and ecosystem.

Several species have been targeted by humans for commercial fisheries with varying success. The Antarctic toothfish is targeted for commercial consumption and the sustainability of this fishery is a subject of contention.

"The adult emerald rock cod, the species my research focuses on is about 170mm in length while the largest, the Antarctic toothfish, can exceed two metres when fully grown.

"Climate change is a major area of scientific study. Studies show air and ocean temperatures in Antarctica are increasing rapidly. Conservative estimates predict areas of the Southern Ocean surrounding Antarctica will increase by approximately 2°Cdeg in the next century. I want to find out if Emerald rock cod can adjust and survive this potential increase.

"I have been lucky enough, through the University of Canterbury and Antarctica New Zealand, to have two life changing research seasons over consecutive summers at Scott Base. I am very passionate about Antarctica and hope to carve out a career researching the fish that live there.

"During the last two summers our team has travelled for several hours to catch fish in holes drilled through the sea ice on these trips. Fish were kept in the aquarium at Scott Base and also flown to the University of Canterbury where longer experiments could take place.

"In my research, fish were able to fully recover from short exposures to temperatures up to +6°Cdeg but long periods of time at +4°Cdeg was fatal. However if temperature increase was gradual all fish tested survived the length of the experiment (56 days) at +3°C, and were able to successfully digest food, a vital physiological process for survival.’’

The results of Austin’s research suggests gradual ocean warming up to +3°Cdeg may not push this species beyond its physiological limit and provides some optimism for the survival of this species if ocean temperature in Antarctic doesn’t exceed the predicted 2°Cdeg increase.

Austin says her research, supported by the university’s Gateway Antarctic director Professor Bryan Storey, through the opportunities presented to her by the University of Canterbury, have allowed her to achieve a lifelong dream.