Aid and diplomacy work on cards for law student

A UC law student, who worked with families in Malawi earlier this year, is seeking to carry out international aid and diplomacy work when she finishes her degree. 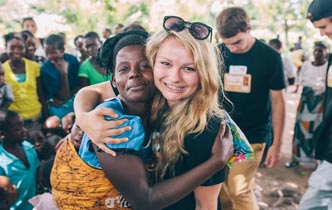 A University of Canterbury law student, who worked with families in Malawi earlier this year, is seeking to carry out international aid and diplomacy work when she finishes her degree.

Anna Cusack was one of five youth ambassadors for World Vision, New Zealand’s largest non-government organisation, which visited Malawi, the focus country of this year’s 40 hour famine annual fundraiser. Cusack got to see where the famine funds went and the difference Kiwis are making in that country.

"We visited villages, schools, churches and health centres to see what life is like over there. I sat in several families’ mud huts and helped collect brown water from their wells. Families are living on just 55 cents a day. Nearly half of all Malawi children are malnourished there and I met children who were severely malnourished.

"Although their situation is difficult, it was inspiring to see what a difference World Vision is making in the community long-term impact by empowering their people.

"In the aftermath of the 2010 and 2011 earthquakes, Canterbury became well known for the way people cared for one another. The students at the University of Canterbury were recognised for the way they, in particular, supported the wider community and lifted people’s spirits through the work of the Student Volunteer Army.

"This good work is continuing today in many other ways and students from the University’s College House hall of residence visit Cholmondeley children’s home every week to be good role models for them.

"As a College House student we also help the local Salvation Army with food deliveries to help in need. Some students regularly help pack food boxes and take them to people in the community.

"We have not only been giving our time but also our money. College House students have raised more than $2000 to help World Vision help combat child poverty in Malawi.

"An awesome aspect to studying law at Canterbury is a real focus on giving back to the community. The law department is to make it compulsory to do a certain number of service hours helping in the community before completing a degree. The quakes were three years ago but the philosophy of service has become engraved into the culture of Christchurch.

"I believe a law degree would best equip me to work in the international community. It teaches me how to analytically and objectively assess a scenario and to establish the various outcomes, different motives and policy issues.

"It develops the ability to weigh up the pros and cons and to argue clear and concisely what I believe is morally right. I hope studying law at Canterbury will give me the firepower to make a positive difference," Cusack, from Auckland, says.

Cusack this week met visiting British international humanitarian aid worker Linda Cruse who has been talking to UC students and University emergency management experts on campus this week. Cruse helped people in the Philippines following the 2013 typhoon. She has responded to other natural disasters in third world countries including the 2004 Asian tsunami and the 2005 Pakistan earthquake.

Cruse has worked with Tibetan, Afghan, Burmese refugees and other challenged communities in the deserts of Uzbekistan, the jungles of the Amazon, and the mountain nomads in the Himalayas and Atlas mountains. Her work has been actively supported by Prince Charles, the Dalai Lama and Sir Richard Branson.