A University of Canterbury music graduate and one of New Zealand's most acclaimed flautists Miho Wada will undertake several major tours with her small jazz orchestra. 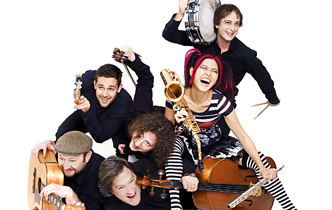 A University of Canterbury music graduate and one of New Zealand’s most acclaimed flautists Miho Wada will undertake several major tours with her small jazz orchestra later this year and in 2015.

Wada and her jazz orchestra will perform later this year in Japan and Canada and next year in the United Kingdom and the United States.

They have been busy performing and recording non-stop for the last six months and have just released their third jazz album Mystery Banana which started with recording in Tokyo while on tour last year.

Wada, known as the Punk Flute Ninja, said her years studying music at the University of Canterbury was the perfect place from which to launch her career.

"I loved my time learning music at Canterbury as it great to be a part of close-knit community. I always had a lot of support from fellow music students and teachers. My lecturers were all so knowledgeable.

"I would love to go back to the University of Canterbury, talk to music students there and give a concert to support them as Christchurch recovers and grows in the rebuild.’’

Her Canterbury music lecturer and principal flute of the Christchurch Symphony, Tony Ferner, says he always felt Wada would succeed as a career musician.

"I recognised huge determination and knew her talents would culminate in something special. Miho was a model student who always positive about all things and easy to teach because she was good at taking in the concepts.

"She took her opportunities with both hands and has created her own unique style of what she is. Miho was never afraid to try anything.’’

"His flute playing was so beautiful I learnt so much from him. He admired and valued individuality. I had other teachers in Europe after I left the University of Canterbury who wanted students to play exactly like them, but Tony encouraged and brought out the best in each student.

"He was also very passionate about Fine Arts and taught us the importance of the colour within the sound. Playing music with different tonal colour has been a vital part my music.’’

Wada has performed internationally with artists such as Nigel Kennedy, Iggy Pop and members of the Buena Vista Social Club.

Wada was spotted by renowned violinist Kennedy at the Ronnie Scott's Jazz Club in London and she later performed jazz trio concerts with him.

She has since played at the Tanja Latino Festival in Morocco and the WOMAD festival in Adelaide, Australia.