A University of Canterbury research project has surveyed more than 1300 parents to help provide the first comprehensive study on early language development in New Zealand. 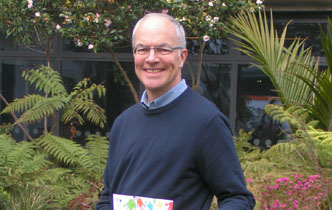 A University of Canterbury research project has surveyed more than 1300 parents to help provide the first comprehensive study on early language development in New Zealand.

The KidsWords project is a nationwide survey of the early language development of children living in New Zealand and part of an on-going study supported by the Marsden Fund of the Royal Society of New Zealand.

The UC survey aims to find out how many words New Zealand toddlers know by the time they are two and a half years old.

It is the first study of its kind in New Zealand and it is hoped it will address a pressing need to have up-to-date information on children in this country. Most of what is known about children’s early language development comes from research done on children in other countries, Professor Tom Klee says.

"When the results are known parents, early childhood professionals and health professionals will have a reliable source of information about children’s early vocabulary and grammar. They will know what to expect in terms of children’s developmental milestones.

"We expect to have comprehensive results later next year which will be helpful to parents and early childhood professionals. The results will also provide an evidence-based clinical assessment that can be used by speech language therapists when evaluating young children with language difficulties,’’ Professor Klee says.

The University of Canterbury study aims to draw conclusions from a nationally representative sample of 3000 children growing up in New Zealand - 100 boys and 100 girls at each month of age from 16 to 30 months.

The Plunket Society is supporting the project by encouraging parents to participate in the online survey. Another 1700 parents are needed for the survey. Any parent with a child in the 16-30 month age range is able to participate. Parents are invited to complete an online questionnaire at www.KidsWords.org and no further involvement is required.

New Zealand professionals who work with young children, such as speech language therapists, early childhood educators and developmental psychologists, have had to rely on studies of American, British and Australian children rather than data from New Zealand communities.

Professor Klee says as many as 15 percent of children have difficulties learning to talk. Delays in early talking could sometimes be the first sign of problems in other areas such as hearing, learning or developing relationships with other children.

Early identification of difficulties in talking is the key to helping children who need it through services provided by speech and language therapists and other experts.