A University of Canterbury research project has calculated the popularity of all the colour combinations of flags for 194 sovereign countries. 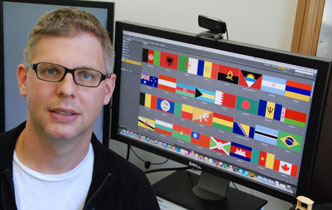 A University of Canterbury research project has calculated the popularity of all the colour combinations of flags for 194 sovereign countries.

The study of flags is an important field of research, in particular in the context of history, he says.

"We analysed the colours of 194 sovereign countries as they are listed in Wikipedia. We calculated 12 colours used the most in all the national flags. The colours were unevenly distributed and red, white, green and dark blue together made up for almost 75 percent of the surface in all flags.

"We also calculated the popularity for all the colour combinations in the flags. Based on our analysis, we are able to suggest a unique and popular new flag. For a new country, then the combination of dark blue and red would be the best choice for a two coloured flag.

"On the other hand, the more white the flag contained the higher the per capita GDP. Again, using a certain colour will not make a country richer or poorer, and neither do countries choose their colours because of their wealth. Still, the wealth in this world is not evenly distributed, and neither are the colours of flags.

"Flags are part of popular culture. They are emotional symbols that have a high importance. The flag of the USA frequently gets burned in public in certain countries to express disrespect. We also carry flags when entering the Olympic Games.

"But how unique are flags? Ideally, every country should have a flag that is clearly different from all other flags. This is, in particular, useful when at war to be able to tell apart friend from foe. In reality, there are several flags that are easy to confuse with another. The flags of Romania and Chad, for example, only differ in their tint of blue.

"We analysed the uniqueness of flag and frequency of colour combinations and developed a semi-automatic software system that allows us to answer these issues.

"Such an analysis can also serve to inform designers; not only flag designers, but designers in general. In an economy that overflows with products it becomes increasingly difficult to create a colour scheme that is popular and unique,’’ Dr Bartneck says.

You can watch a YouTube video on this research here or read more here.