Britain's Professor Graham Richards, who until recently was head of the biggest university chemistry department in the western world, will visit the UC later this year. 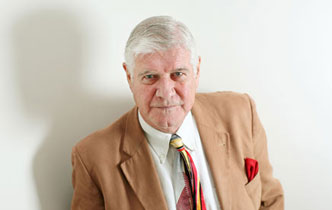 Britain’s Professor Graham Richards, who until recently was head of the biggest university chemistry department in the western world, will visit the University of Canterbury (UC) later this year.

Professor Richards will give lectures in both Christchurch and Wellington and will look at UC projects during his visit in late November.

His Oxford University research was largely in the area of computer-aided drug design of which he was one of the pioneers, publishing more than 350 papers and authoring 19 books.

He was the scientific founder of Oxford Molecular Group Plc, which was grown from a 350,000 pound start-up to a public company valued at its height at 450 million pounds, before eventually being sold for 70 million pounds in two parts.

He raised 64 million pounds to build a new chemistry research laboratory at Oxford University with the most innovative aspect being the deal he did with a city institution. Half of the University's equity in spin-out companies from his Department goes to the group in return for a substantial up-front payment.

As a consequence of that deal Professor Richards founded IP Group Plc, of which he was sequentially Chairman and senior non-executive director, and is now a Venture Partner.

Among the numerous awards that he has received are the Ital Gas Prize,the American Chemical Society Award for Chemical and Pharmaceutical Research and the Mullard Award of The Royal Society.

"One in four people throughout the world will contract some form of cancer so nearly everyone will have a relative, friend or colleague who has suffered or is suffering from the disease,’’ Professor Richard says.

"People now have the opportunity to make a positive impact on the disease by donating their unused computer power, which will enable us to accelerate our programme of research and come up with many new molecular candidates that could be developed into cancer drugs.’’

His screensaver project was the biggest computational chemistry project ever undertaken, involving screening 3.5 billion compounds against protein targets, led by the group using screen saver time on over three million personal computers in over 200 countries.

The screensaver project led to the formation of the spin-out company Inhibox Ltd (www.inhibox.com) where Professor Richards now conducts his research and is Chairman of the company.

Professor Richards will be hosted at UC by the Head of Chemistry, Professor Antony Fairbanks.