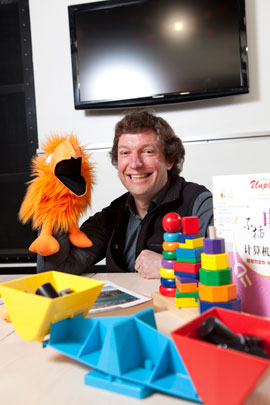 Professor Bell says women are under-represented in computer science and it is estimated that in New Zealand women make up less than 30 per cent of technical roles in the computing industry.

"This is something that needs to change because there is a huge demand for graduates in this area. Research shows that women are just as capable in this area as men so one of the best ways of increasing the number of professionals in this field is by encouraging women into it."

UC computer science student Caitlin Duncan says many companies are particularly interested in hiring women not because they need to even out the ratio, but because women tend to have better communication and interpersonal skills.

"Women enjoy the combination of technical and non-technical work that leadership positions in these companies require. It is crucial for the health of the industry to encourage women into this area, especially as technology becomes more entrenched in our daily lives. Women use technology just as much as men, so it follows that they should have just as much say in its creation.

"At UC we are trying to get the message out to young women that this is an incredibly exciting field to work in, with an infinite number of real world applications and that it is certainly not just for boys," Caitlin says.

Professor Bell recently ran a weekend workshop for young women with a large number of high school students attending. The young women demonstrated they were easily capable of grappling with computer challenges, he says.

"The event was a very positive message to the young women who participated that their perspective and skills are valuable in designing new technology. This is a strong counter to the negative messages they often get through western culture, which creates false stereotypes of the kind of people who do computing," Professor Bell says.

Google, in conjunction with Professor Bell, recently launched an online Computer Science Field Guide, aimed at high school pupils. It complements the new NCEA standards for computer science, designed to give pupils a springboard into programming. The guide is available free online at: www.cosc.canterbury.ac.nz/csfieldguide/student.