What if people were complacent about tsunamis?

A visiting Australian expert will give a public lecture at the University of Canterbury (UC) next week about the threat of tsunamis. 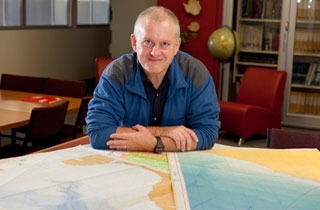 A visiting Australian expert will give a public lecture at the University of Canterbury (UC) next week about the threat of tsunamis.

Professor James Goff of the University of New South Wales in Sydney is a visiting Erskine lecturer at UC and will talk about tsunamis at his lecture next Wednesday (8 May). The Erskine fellowship programme was established in 1963 following a generous bequest left by former distinguished UC student John Erskine.

Professor Goff says local and regional authorities are still only just waking up to the fact that their coastlines are exposed but they don't really know how bad things could be when a tsunami hits New Zealand’s shores.

Eighty-five percent of all historically documented tsunamis have occurred in the Pacific region and while scientists are still pretty much scratching the surface when it comes to understanding how bad these events have been over the past few thousand years, New Zealand is well ahead of the game and has one of the most comprehensive geological records of tsunamis in the world.

"Once you start looking back over the past few thousand years, the greatest number of tsunamis found at any one site in New Zealand is on the West Coast, not the east coast as most people suspect,’’ Professor Goff says.

In the lecture, he will ask if it is true that the Japanese were unprepared for the 2011 tsunami and what does New Zealand ignore at its peril?

"Tsunamis can be catastrophic and events such as the recent Tohoku-oki disaster in Japan show us just how bad they can be.

"However, all is not lost because many researchers are now producing detailed tsunami hazard assessments that are there to help manage such events. The important thing though is to know how good those assessments really are – we do not want to be lulled into a false sense of security, but equally we do not want to hit the panic button.

"My focus is primarily to wake up a few more people to the tsunami hazard in New Zealand. Since the relatively minor 2010 Chile earthquake that sent New Zealand a long distance tsunami, some local and regional authorities have been waking up to how bad things could be.

"We need to seriously understand the nature of the tsunami hazard for New Zealand's coast. We don't know when they are going to happen, but we do know that they will - so let's know as much as we can about the nature of this beast,’’ Professor Goff says.