A University of Canterbury food expert is questioning whether people's eating habits influence their children's genes. 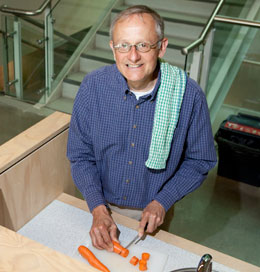 A University of Canterbury food expert is questioning whether people’s eating habits influence their children’s genes.

UC toxicologist Professor Ian Shaw (Chemistry) says it has not been proven but there is significant evidence pointing in that direction.

"This isn’t about a pregnant mum’s exposure causing direct effects on the baby’s genes. It is about effects on sperm and egg genes being transferred to the embryo, but not conventional DNA effects - rather subtle changes in chemical marker signals on the surface of DNA. It’s called epigenetics.

"Feed a thin rat a lot of food and it gets fat. Breed the fat rat and don’t feed its pups large amounts of food but, even so, they will be heavier than average. This is because DNA changes have occurred which are transferred to the pups and signal them to be fat.

"This wears off after several generations, unlike conventional DNA changes called mutations. All a bit complex, but it is an exciting and very new field," Professor Shaw said.

The UC expert, who has featured in the TV3 programme What’s Really In Our Food, will give a public lecture on campus on Wednesday April 3. Details can be found at http://www.canterbury.ac.nz/wiw/

Professor Shaw says healthy mothers are likely to produce healthy babies but those mothers might also send signals to their babies via epigenetics which might influence their child’s future development, but such signals are not necessarily bad.

This is Professor Shaw’s current research area which, while controversial, is gaining some acceptance.

"I am concerned with esoteric exposures like those that the New Zealand Malayan veterans received during the Malayan Emergency such as dibutyl phthalate and the effect these exposures might have on their children’s development.

"From a microbiological point of view food is definitely safer than 20 years ago but as we increase the number of chemicals we use in industry and farming there are increasing numbers of chemical residues in our food and we don’t know what complex cocktails of residues might do to us," Professor Shaw said.