For the first time, people will be able to walk the streets of Christchurch and see how it was before the earthquake using a wearable augmented reality device. 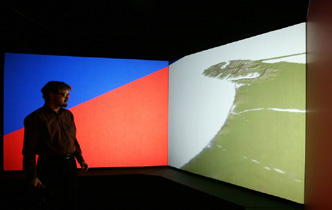 For the first time, people will be able to walk the streets of Christchurch and see how it was before the earthquake using a wearable augmented reality device.

The University of Canterbury’s HIT Lab NZ has developed a version of its popular CityViewAR mobile application for the Google Glass platform.

Google Glass is the latest in wearable computing technology that allows people to see virtual images superimposed over the real world.

Using CityViewAR on Google Glass people can walk through the city and see buildings that have been demolished and also immersive panorama pictures taken right after the earthquake, Hitlab Director Professor Mark Billinghurst says.

"Unlike using CityViewAR on a mobile phone, with Glass users can walk through the streets and see information in a hands-free, more immersive manner. This is the first time anywhere in the world that Google Glass has been used for city scale visualisation and it demonstrates the type of tourism or architecture applications that could be delivered on Glass in the future.’’

UC’s HIT Lab NZ is one of the few organisations in New Zealand that has Google Glass and Professor Billinghurst has just returned from a five month sabbatical working at Google with the Glass team.

In the coming months HIT Lab NZ staff and students will be conducting more research on Glass.

"The Google Glass project has received a tremendous amount of publicity since it has been announced. Over the next few months HIT Lab NZ staff and students will be developing novel user experiences using Glass, such as new ways for people to collaborate together or to see information in the world around them,’’ Professor Billinghurst says.