A University of Canterbury scientist is using discarded hoki fish eyes to help early detection of diseases like diabetes and cancer. 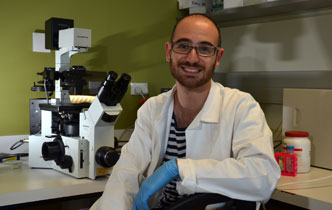 A University of Canterbury scientist is using discarded hoki fish eyes to help early detection of diseases like diabetes and cancer.

Dr Luigi Sasso says looking at the proteins in hoki fish eyes is great for the environment and will also help people’s health in the long term. He is researching at UC’s Biomolecular Interaction Centre to investigate pioneering new areas of cutting-edge nanotechnology.

The green materials he is using in his research are proteins extracted from the eyes of fish which would usually end up in the rubbish bin.

The protein is removed from unwanted fish heads via a method developed in the UC lab, Dr Sasso is producing very small nano-thin protein structures that can be manipulated and used for research. He said the research was a step toward solving many health issues in society.

"My research is based mainly on utilising biological materials for technology. In today’s world, where us humans have abused and oppressed our natural environment for our purposes, I believe it is important to learn how to work together with the world we live in, especially when it comes to technological development.

"The study of biological structures already found in nature can lead us to alternative methods to develop biosensors or other analytical devices from green nano fibres which can be used to detect sugar levels for diabetics, lactose (for dairy-intolerant people ) and downstream indicators of diseases such as cancer.

"How great would it be if you could go down to the pharmacy, pick up a cheap and easy to use device to check your blood for early stages of cancer and then toss it in the recycling bin when you’re done? It would allow people to be aware of their health issues way before they reach a dangerous level, meaning that, in the end, more lives would be saved.

"I know there are a lot of scientists and researchers around the world working towards making this a reality. In our research group we are collaborating with the Technical University of Denmark to apply our scientific expertise towards a common goal.’’

UC has received more than $1 million to launch the project which will be breaking new barriers of scientific research looking at nano-fibres that are up to 10,000 times smaller than a strand of human hair.

Dr Sasso is working at UC with Dr Madhu Vasudevamurthy and Professor Juliet Gerrard, a world leading bionanotechnology expert. Professor Gerrard said the UC group was the only one in the world with an ability to manufacture protein nano-fibres on a large scale which will be hugely helpful in diagnosing illnesses. The UC research aims to put New Zealand at the forefront of bionanotechnology research.