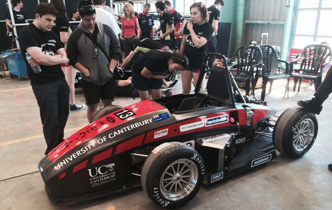 University of Canterbury (UC) mechanical engineering students have won the Inspired Engineering Award and finished ahead of Auckland University in the international university racing car competition at Victoria University in Melbourne.

The UC mechanical engineering team designed and built their own racing car that clocked 0 to 100km an hour in under four seconds.

The UC car was one of nine cars that finished both endurance races and was only one of two cars from 23 universities chosen to be driven by a professional driver for a test session.

"He gave us some excellent feedback and it was a great honour for us. In prizegiving, there were two major pieces of silverware, one for overall winner and one Inspired Engineering Award. We won the latter, which was sponsored by CAMS and includes free CAMS motorsport licenses for all of our team next year.

"Overall, this was an incredible result for the University of Canterbury and a great credit to our whole department.’’

"One event commentator told us our UC car was absolutely beautiful. UC has a great reputation for our focus on engineering design so everyone was expecting us to bring a good car. But nobody expected anything close to what we produced.

"A design judge that has worked at Boeing Aerospace and Aston Martin Racing told our team that of all the cars in the competition, he favoured our car the most.’’