University of Canterbury (UC) mechanical engineering students are trialling a racing car they have designed and built themselves. 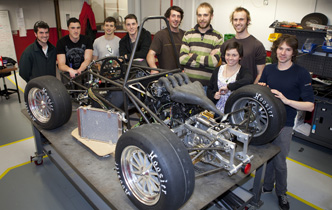 University of Canterbury (UC) mechanical engineering students are trialling a racing car they have designed and built themselves to compete in the Formula Society of Automotive Engineers Australasia design competition in Melbourne later this year.

A total of 13 UC students have designed and built the whole car as their final year project. They have been carrying out tests by the Wigram Air Force Museum on a large tarmac area outside the hangars.

"We have been testing there twice a week for the last three weeks. The staff at Wigram are very enthusiastic about supporting UC students, which we are very grateful for, as without this facility we would be unable to do our car and driver development,’’ UC mechanical design engineer Bruce Robertson says.

"Our car needs to measure up to the competition’s dynamic events including an endurance race, an autocross race, acceleration test, maximum cornering speed on a skid pan, and an economy test. It also needs to meet a design report, public presentation, and a cost report. Points are added up from each event do determine the overall placings.

"Our UC students are technically very capable as they come toward the end of their mechanical engineering degree, but for most this is the first time of putting their expertise into action on a real project.

"It’s not unusual for students to work on the car into the small hours of the morning and at times I’ve had to send them home and get some sleep otherwise they’d just run themselves to exhaustion. I think their motivation comes from their desire to prove themselves, and knowing they have a great opportunity to develop their skill which they don’t want to waste.

"One of the female students on the project, Abby Neave, has been an outstanding member of the design and build team.

"We plan on having Abby as one of the drivers at the competition in Australia. There is no doubt she has caught the motorsport bug, with all the accompanying highs, lows, and adrenaline rushes. Once she gets in the driver’s seat on a test day she just keeps going faster and faster each lap, and we usually have to flag her in or she’d just keep going.

"The financial implications are frightening, especially considering the students are generally broke. However we have found a number of generous sponsors, including the UC Mechanical Engineering department.

"The remaining money we need to raise is to pay for the team to travel and transport costs to Melbourne in December,’’ Robertson says.