A University of Canterbury postgraduate student is using digital media to help people with dementia to improve their quality and quantity of communication. 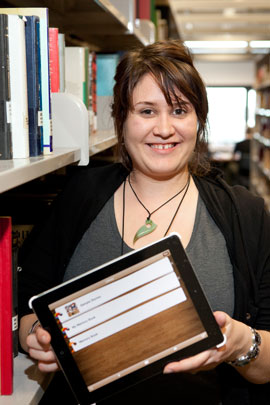 A University of Canterbury postgraduate student is using digital media to help people with dementia to improve their quality and quantity of communication.

Katrina Aitken wants to determine whether using a computer tablet provides positive results. She will deliver a paper on her research at the UC Maori postgraduate symposium next week on August 22 and 23.

"The most common type of dementia is Alzheimer's disease which affects a person's memory and, as the illness progresses, impacts on a person's ability to effectively participate in communication. It can also affect a person's swallowing ability and can lead to weight loss.

"I have been involved in a pilot project with the Canterbury District Health Board since early last year. It began as a four month-pilot to look into service provision for older people’s health and psychiatric service for the elderly.

"This role will continue until the end of January 2014 demonstrating there is demand for speech language therapy services for older people in need."

The Department of Communication Disorders at UC this year hosted an Erskine lecturer, Professor Michelle Bourgeois, who is recognised as a leading contributor to research in the area of cognitive communication disorders related to dementia. The Erskine fellowship programme was established in 1963 following a generous bequest by former distinguished UC student John Erskine.

Aitken’s research is based on an early study by Professor Bourgeois looking at helping people with dementia.

"As technology develops and access to mobile and electronic devices becomes easier, more people are using applications to plan daily activities and communicate with others. We can incorporate alternative and augmentative communication aids in helping people with dementia. This is a way of compensating for memory loss and engaging in social activities," Aitken says.