A 19-year-old University of Canterbury commerce student, Liam Malone who lost both legs at the age of two, is aspiring to be New Zealand's top sprinter. 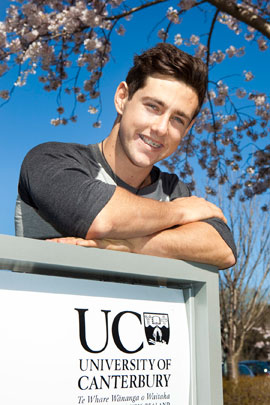 A 19-year-old University of Canterbury commerce student Liam Malone who lost both legs at the age of two, is aspiring to be New Zealand's top sprinter at the 2016 Paralympics after raising enough funds to buy a pair of blades.

Despite having no feet, Malone has not been put off sports like rugby and snowboarding.

The former Nayland College student from near Nelson was born with a condition named fibular hemimelia, which meant both of his legs had to be amputated below the knee when he reached the age of two.

"I want to be the fastest disabled sprinter in the world. I have just received enough funding for the $20,000 to $25,000 blades now and will be keen to secure them over the next six months as there is a process to go through," Malone says.

"All the money was donated, which was incredibly overwhelming. I owe New Zealand a lot.

There are two companies that build the blades. I haven't decided which company I will go with yet. The blades are made especial for an individual. I have never had the privilege of putting any on yet.

"I started skiing around the age of six and switched to snowboarding when I was 13. Snowboarding was a sport I could really compete equally against my peers.

"I was always involved in sport at school. My peers and coaches treated me no differently so I grew up with the expectation of having no excuses and to just simply try my best. I played rugby and cricket from the age of six.

"I never carried on with sprinting in my early teens because I was dealing with the illness of my mother and wanted to experience a normal teenage life. Sprinting would have taken up too much of my time.

"My goal now is to get blades to run on. I'm currently training on artificial limbs that are not designed for the activities I currently do.

"I have not competed since I was 14, in Australia. I decided I would have a break and come back to athletics in the future, running distances over 100 metres, 200 metres and the 400 metres.

"I’m in need of blades. I keep breaking my current artificial feet, which restricts my training. It was only thanks to my newly made friends at Rochester and Rutherford Hall that made me rethink about getting back into sprinting as a sport. A friend Alice Eddington really opened my eyes to the opportunity at hand.’’

"I'll be completing a skydive course at the end of the semester also,’’ Malone says.

UC Sports Programme manager Grant Robertson says he is looking to support Malone towards his goal of competing at the 2016 Paralympics,

"As part of our athlete development programme which supports 100 of UC's best athletes, Liam will receive support and servicing in athlete education, biomechanical technique analysis, exercise physiology, strength and conditioning and student-athlete support.’’