A University of Canterbury (UC) commerce and law student has produced an app which is available on Apple and android phones to help businesses. 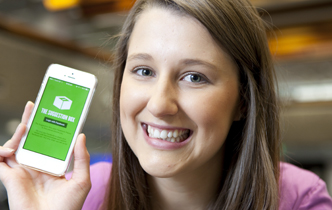 A University of Canterbury (UC) commerce and law student has produced an app which is available on Apple and android phones to help businesses seeking suggestions from customers.

Hannah Duder won the apps section of the annual Entre student-run competition at UC this year. She produced The Suggestion Box app to provide a place for the public to make suggestions to businesses. The app is now downloadable for Apple and android cellphones.

Duder says the idea behind developing the Suggestion Box was to replace old complaints, compliments and suggestion boxes that businesses have.

"I have many upcoming meetings with businesses and plan to approach larger businesses such as supermarket chains, hospitals, universities, airports and hotel groups.

"Most people do not like confrontation, or do not have the confidence to tell a business the ideas they have. The physical suggestion boxes require too much effort for this day and age. People rarely want to spend time writing a comment down on paper when people can see. Also, suggestion boxes are usually hidden away and not that inviting.

"The Suggestion Box replaces the old hand-written system which is an archaic dust collector. The phone app creates a free, easy to use and anonymous way to give feedback to businesses.

"It allows users to make suggestions in one place to many different businesses. The app saves time and trees and lets the user make a suggestion even after they have left the businesses.

"A current issue is that businesses make mistakes, and mistakes make those who encounter them angry. But in the social-media era, angry people don't just send a letter to a business owner. They vent publicly.

"Rather than letting that business know they will just never return for their service again. The app will hopefully make people tell the business about these encounters which will then make them feel heard and potentially be followed up by the business.

"The Suggestion Box allows users to write a suggestion of up to 140 characters and also to rate the suggestion as positive or negative. The user logs in via Facebook, which requires just one click and then they just start typing the place name and the app should then give recommendations of places to make a suggestion too.

"Most businesses use expensive online survey products which they have to provide high incentives for their customers to use. Also, some businesses are still using pen and paper systems to gather feedback which require their customers to approach the box and write the suggestion, which can be intimidating and not easy enough.’’

Duder will work on the app over the summer after her accounting and law exams to develop her app further and pitch to businesses.

"Hannah was one of this year’s UC Innovators' Summer Start-up Scholars where 25 students, supported by experts, developed their own ideas into new ventures,’’ Wright says.